Film / My Dinner with Andre 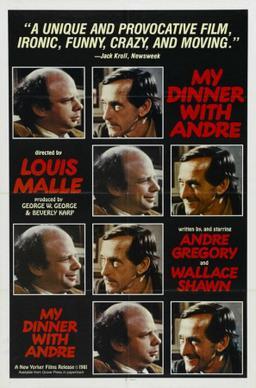 "Someone asked me the other day if I could name a movie that was entirely devoid of clichés. I thought for a moment, and then answered, 'My Dinner With Andre.'"
— Roger Ebert
Advertisement:

Two men have dinner together in a fancy restaurant and discuss life.

No, really. That's the entire plot.

The 1981 movie was directed by Louis Malle and written by its stars. In it, Wallace (played by Wallace Shawn), a playwright and actor, goes to a restaurant to meet his old friend Andre (played by Andre Gregory), whom he hasn't seen for a while, and the film essentially follows their conversation over dinner throughout the course of the evening. It begins with Andre discussing his experiences since Wallace has last seen him, which mostly involves experimental theatre in various exotic locales, before the two men become involved in a friendly debate between Andre's spiritualistic and idealistic worldview and Wallace's down-to-earth and pragmatic humanism.

Okay, so maybe not the most exciting plot ever. But it's regarded as a cult classic among aficionados of independent cinema for its philosophical themes and minimalist presentation. It's also unique; whatever else can be said, there are not that many movies out there like it. And hey, it's probably one of the most easy-to-summarise movies in existence.

My Dinner with Andre provides examples of:

"I mean, you know, people hold on to these images of father, mother, husband, wife... again for the same reason... 'cause they seem to provide some firm ground. But there's no wife there. What does that mean? A wife. A husband. A son. A baby holds your hands... and then suddenly there's this huge man lifting you off the ground... and then he's gone. Where's that son?"