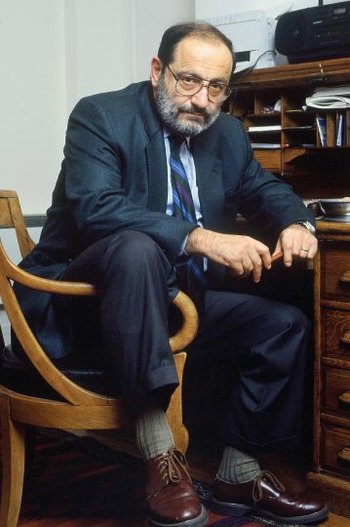 "All the stories I would like to write persecute me when I am in my chamber, it seems as if they are all around me, the little devils, and while one tugs at my ear, another tweaks my nose, and each says to me, ‘Sir, write me, I am beautiful’"
Advertisement:

Umberto Eco (January 5, 1932 - February 19, 2016) was an Italian medieval historian, semiotician (semiotics: the study of signs and significationnote If Dan Brown's fictional discipline of "symbology" were real, it would fall within the field of semiotics.), and philosopher. Outside academia, he is best known as a novelist, particularly his debut novel, The Name of the Rose, which was made into a film starring Sean Connery.

Because of his background, his works tend to avoid Small Reference Pools and Viewers Are Morons—only to go right through to the other side, invoking Viewers Are Geniuses instead. His novels abound in language games, meticulously researched history and more than a little philosophizing. Basically, he's the polar opposite of Dan Brown: a knowledgeable and skillful writer whose fiction is well researched, and full of genuine historical, narrative, and cultural intrigue, but who never pretends that his novels are anything more than stimulating intellectual entertainment. In fact, he once humorously mused, in The Paris Review

, that Dan Brown might as well have stepped out the pages of his book Foucault's Pendulum.

He listed Western tropes in a 1975 comic essay "How to Play Indians". He also wrote an essay in 1984 about tropes called "Casablanca: Cult Movies and Intertextual Collage", which ends with what might as well have been to a reference to TV Tropes, describing a possible future in which viewers and artists are all equally aware of the universe of tropes and spend their time recognizing them and using them to communicate.note Après nous, le déluge.

Tropes pertaining to his work in general