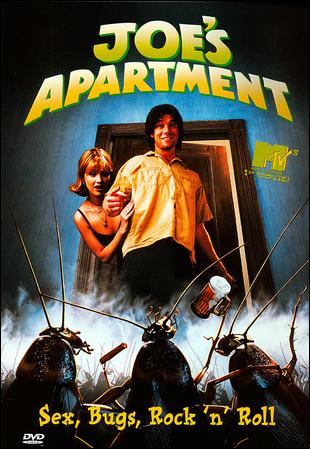 "Movies about cute mice and cute pigs are one thing. Movies about cute cockroaches are something else; I don't think we're ready for this."
— Roger Ebert in the end of the year specials on Siskel & Ebert
Advertisement:

Joe's Apartment is a 1996 musical-comedy film produced by MTV, based off of a short film that appeared on the Liquid Television anthology series, and follows a hapless apartment owner who lives with thousands of cockroaches.

Joe (Jerry O'Connell) has just moved to New York City from Iowa, in need of money and a job. A local artist helps Joe get an apartment in a building slated for demolition, where he discovers that a horde of cockroaches is also present - singing, dancing cockroaches. Joe and the roaches soon strike an uneasy friendship - he's just glad to have an apartment, and they're glad that Joe is a complete slob. After a string of attempted jobs get ruined by the roaches, Joe signs on to become the drummer in a local band and meets Lily Dougherty (Megan Ward), the daughter of a senator (Robert Vaughn) who is looking to tear down the building Joe lives in and build a prison over top of it. With the help of the roaches, Joe tries to help Lily create a community garden and stave off the threat of the building's demolition.

Joe's Apartment was the first project helmed by MTV Films, and was loosely based on the 1992 short film of the same name (which was inspired by Twilight of the Cockroaches), which MTV frequently aired as filler material between music videos. The movie featured a large amount of grossout humor, and more than 5,000 actual cockroaches were used during production of the film. The computer-animated roaches were one of the earliest jobs for animator Chris Wedge and his fledging Blue Sky Studio.

The movie flopped at the box office, and was critically panned by reviewers and general audiences.

Whose Line Is It Anyway? fans will recognize the "dancing cockroach" scene from a playing of News Flash on the US series original run.