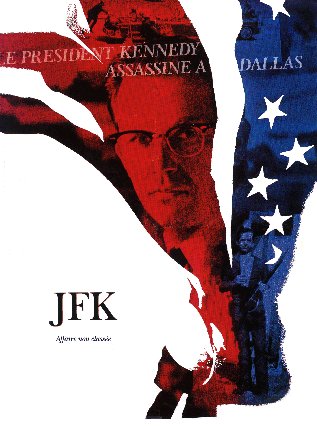 "To sin by silence when we should protest makes cowards of men."
— Ella Wheeler Wilcox, in the first words that appear onscreen
Advertisement:

JFK is a 1991 film directed and co-written by Oliver Stone about the assassination of John F. Kennedy and its aftermath, based around the investigation by New Orleans District Attorney Jim Garrison (Kevin Costner). After reading the Warren Report and finding it unsatisfactory, Garrison decides to launch an investigation on his own. After reviewing witness reports and interviewing some people on his own, Garrison becomes convinced Kennedy was killed by a conspiracy, and that all of the suspicious events seem to be circling a Texas businessman named Clay Shaw (Tommy Lee Jones), who goes by the alias Clay Bertrand. Shaw has connections to Lee Harvey Oswald (Gary Oldman), the CIA, the FBI, and others.

After his case gains publicity, Garrison is invited to Washington, D.C. for a confidential meeting. The man (Donald Sutherland), who goes only by the name "X", says that Garrison is closer to the truth than he thinks, and gives him background information regarding his suspicions that JFK was killed by a conspiracy involving the CIA, the military, and business interests (the "Military-Industrial Complex") in order to, among other things, stop him from bringing The Vietnam War and the Cold War to an end.

Invigorated by this new information, Garrison arrests Shaw for conspiracy and puts him on trial, detailing his entire theory about the assassination and the various inconsistencies with the "official story", most famously the theory of the "magic bullet". Despite his passionate push at the trial (and, as was later revealed, the belief by jury members that there was a conspiracy) Shaw is acquitted of all charges.

The film was and still is intensely controversial for its liberal use of Artistic License in depicting the events of and around Garrison's investigation, when in reality the movie is not meant to be the definitive investigation into Kennedy's death, but rather an allegory of the general public's frustration over not knowing the actual truth about the assassination. Or so Stone says, but in other interviews, well... Stone released an annotated screenplay with all of the references.

The movie was a major critical and box office success, winning two Academy Awards (for editing and cinematography), and was nominated for six more, losing Best Picture to The Silence of the Lambs.

Based on the books On the Trail of the Assassins by Jim Garrison and Crossfire by Jim Marrs.

Not to be confused with Killing Kennedy, the docudrama about JFK and Oswald which has Oswald as the lone gunman.