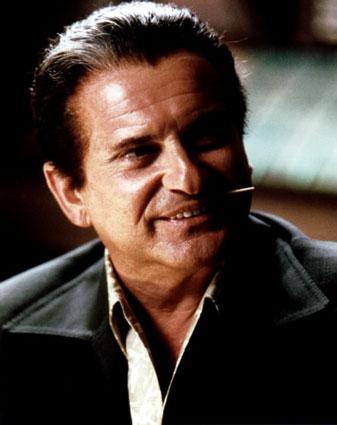 "What do ya mean, funny? Let me understand this 'cause, I don't know, maybe it's me, I'm a little fucked up maybe, but I'm funny how? I mean, funny like I'm a clown, I amuse you? I make you laugh... I'm here to fuckin' amuse you? What do you mean funny, funny how? How the fuck am I funny? What the fuck is so funny about me? Tell me."
—Tommy DeVito (played by the man himself), Goodfellas
Advertisement:

Usually known for playing violent Mafia mobsters or grouchy but lovable funnymen, Pesci has starred in a number of high profile films, including raw dramas like Goodfellas, Raging Bull, Once Upon a Time in America, JFK, Casino and The Irishman, comedies such as My Cousin Vinny, Home Alone, Easy Money, and Lethal Weapon (starting with Lethal Weapon 2).

He is famous for portraying characters with terrifying Hair Trigger Tempers. He has a really filthy mouth too.note How filthy you ask? On the set of Home Alone, Chris Columbus placed a Swear Jar for the adult actors to place change in whenever they used bad language. Supposedly, Pesci filled it up in a single day.

He started as a child actor on the New York stage, but only became a full-time actor after his success in Raging Bull. Before then, he had a long list of He Also Did occupations. He worked as a barber, a restaurant owner, as part of a comedy team with his future frequent Those Two Actors partner Frank Vincent, and on the fringes of the music business. He was friends with several members of Frankie Valli and the Four Seasonsnote His character in Goodfellas was named after Four Seasons member Tommy DeVito and played a role in their formation, was a member of Joey Dee & The Starliters (of "Peppermint Twist" fame), and even tried his luck as a solo singer under the Stage Name Little Joe Ritchie, releasing the album Little Joe Sure Can Sing! in 1968. 30 years later he recorded a comedy music album in-character as Vincent LaGuardia Gambini.

He retired from acting in 1999, and his very occasional returns to the big screen since were all huge news, especially when he reunited with Martin Scorsese and Robert De Niro in The Irishman.

He was also a good friend of stand-up comedian George Carlin, who said in his routines that he prayed to Pesci, because he "looks like a guy who can get things done".

Despite playing dangerous and foul-mouthed sociopaths, he is known as an extremely humble, soft spoken man who gave one of the shortest speeches in Oscar history after winning Best Supporting Actor for Goodfellas. He simply took a breath and said, "It was my privilege. Thank you." It was over in three seconds. The reason for the brevity is that he really didn't think he would win and didn't prepare a speech; he was genuinely surprised.

Troper, what are you still doing here? I thought I told you to go fuck your mother!