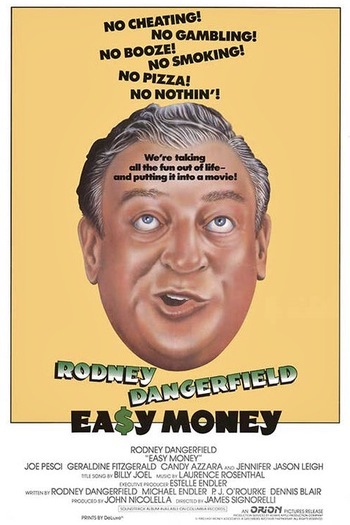 Monty Capuletti (Dangerfield) is a Staten Island baby photographer with a supportive wife, Rose (Candy Azzara), but a tight-fisted, super-rich mother-in-law, Mrs. Monahan (Geraldine Fitzgerald), who despises his bevy of vices including drinking, smoking, eating junk food, gambling, and some socially acceptable drugs. Not too long after his daughter's wedding—for which Monty and best friend Nicky (Joe Pesci) destroy the cake with their drunk driving—Mrs. Monahan dies in a plane crash. Her will states that Monty will inherit the family's $10 million department store empire, On One Condition: that he go a year without indulging in his bad habits.

A subplot involves Marty's virginal daughter Allison's (Jennifer Jason Leigh) marriage to Julio (Taylor Negron), which is disrupted by her unwillingness to have sex; she's especially offended when Julio produces an illustrated book of sex positions to help educate her. Julio spends a few episodes of doing a very bad job trying to talk to his wife, after she moves back in with dad and refuses to speak to Julio.

Meanwhile, Monty's cousin-in-law Clive (Jeffrey Jones) naturally wants Monty to fail, because then Clive will get everything, but he doesn't really seem to do much other than tricking Monty into designing a line of "regular guy" clothes which get him laughed at a lot. This humiliation, combined with the seeming abandonment of his friends—engineered by Clive, who convinced them they were a bad influence—drives Monty to give up, but just as he's headed out to get drunk, he runs into Julio, who accidentally shoots Monty in the butt—hospitalizing him long enough for the year to pass and the inheritance to be his.

The year up, Monty and family celebrate on a yacht (where Julio tries to hide from Allison, who has reconciled with him and become insatiable in her sexual demands). The lawyer shows up, seemingly to finalize the inheritance, but turns out to be accompanied by Mrs. Monahan, having faked her own death to trick Monty into flying right. In the end, they all live together in a mansion, where Monty seems to have turned around to fully agreeing with his mother-in-law's views—but then he sneaks off to join Nicky and his friends for pizza, poker and beer.