But Liquor Is Quicker 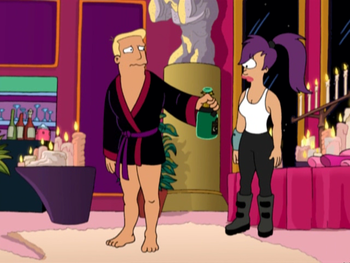 "How do stimulants such as alcohol and drugs affect a woman's level of sexuality? One woman says, 'If I'm tense, all I need is a drink or a little grass to put me at ease. Actually, for me, it's the grass that really does it. The great thing about grass is it makes you totally interested in what you're doing. You're totally aware of every nuance of sensation.'."
— Michael Morganstern, How To Make Love To A Woman
Advertisement:

One of the most well known effects of alcohol and other recreational drugs are to loosen inhibitions, and if a specific inhibition is having sex with someone, that other person can use alcohol or other drugs just for that; the other person could also be drinking or doing drugs so that he or she will be less self-conscious about having sex.

Anyway, this trope is fairly common in fiction, but usually parodied nowadays, and is quickly entering Dead Horse territory due to increased awareness of date rape.

Contrast Above the Influence, Slipping a Mickey, Drugs Are Bad.

Yes, this is likely done in Real Life, but depending on the jurisdiction and level of intoxication, it may qualify legally and/or morally as rape. The full quote is "Candy is dandy, but liquor is quicker."