Music / Ian Dury and The Blockheads 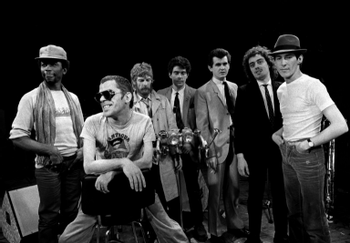 Born in 1942, Ian Robins Dury (12 May 1942 – 27 March 2000) rose to fame in Britain in the 1970s. As front man, lead singer and lyricist of the Blockheads, one of the tightest backing bands of the time, he was a prominent performer in the Punk Rock and early New Wave eras of popular music.

An unlikely star, Dury contracted polio at the age of seven, which left him with a crippled arm and leg. He studied art and subsequently became an occasional painter and art teacher. The death of the rockabilly star Gene Vincent, of whom Dury was a big fan, prompted him to start his own band in 1971 called Kilburn and the High Roads. The group became a popular act on the pub circuit and released a critically acclaimed album but never rose above cult status and soon broke up. His second group, Ian Dury and the Kilburns, was short lived but introduced him to a young Funk-influenced guitarist and pianist named Chaz Jankel, who subsequently became his main songwriting partner.

In 1977, Dury released his first solo album with Stiff Records consisting of songs written with Jankel, New Boots and Panties!!, which featured the single (and future Trope Namer) "Sex, Drugs and Rock & Roll". However, the album was a success and Dury was invited to perform on the Live Stiffs Live tour alongside Nick Lowe and Elvis Costello. A backing band was quickly formed consisting of guitarist Johnny Turnbull, bassist Norman Watt-Roy, drummer Charlie Charles, keyboard player Mick Gallagher and Kilburns saxophonist Davey Payne. The Blockheads were born, taking their name from one of the songs on the album.

In 1978, the band reached its peak with the top ten singles "Hit Me With Your Rhythm Stick" and "Reasons to be Cheerful, Part 3" as well as the hit album Do It Yourself. However, Dury's increasingly difficult behaviour during the recording sessions, fueled by alcohol and drugs, prompted Chaz Jankel to leave the Blockheads for a solo career in America. Teaming up with ex-Dr. Feelgood guitarist Wilko Johnson, the Blockheads couldn't match their earlier success with their next album, Laughter, and officially disbanded.

Having performed together sporadically in the eighties, the band reformed to play a series of benefit concerts in support of Charlie Charles after his diagnosis with cancer. In the mid-nineties, Dury himself was diagnosed with the same illness, galvanising him to release one last album; the critically acclaimed Mr. Love Pants in 1998, now joined by drummer Dylan Howe (son of Steve Howe of Yes) and the controversial Israeli saxophonist Gilad Atzmon. Unfortunately, Ian Dury died in 2000 before his next half-finished record was released.

The Blockheads still perform and record, now fronted by Dury's former minder and driver Derek 'the Draw' Hussey. A Biopic based on Dury's life entitled Sex & Drugs & Rock & Roll was released in 2010, featuring Andy Serkis as the singer.

Sex and Drugs and Rock and Tropes: