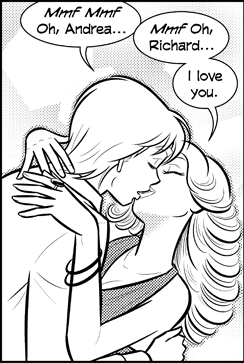 Their names aren't Andrea or Richard, and he's gay.
"How can I possibly know more about being gay than a gay man? I've been in this house too long!!!"
— Ruby (after approximately a week in the house)

Sticky Dilly Buns is a webcomic created, written, and drawn by "Giz" (Gisèle Lagacé) and "Shouri" (María Victoria Robado), collectively credited as "Dahling!". It started on January 7, 2013, and after a few minor Schedule Slips and one longer break, officially came to an end on January 17, 2019. Two of the main characters and many of the supporting cast come from Giz's earlier webcomic, Ménage à 3, and both comics are set in Montreal, Canada. Like its parent comic, Sticky Dilly Buns has a sitcom atmosphere with Slice of Life elements and a degree of (comedy) explicitness about sex — though maybe without quite so much Fanservice. Although Ménage à 3 is explicitly rated R, Sticky Dilly Buns didn't show anything really NSFW — but there was some quite explicit dialogue, some just-off-screen intercourse (straight and gay), and some nudity reflected very small. Word of God was that the lower level of explicitness made selling advertising on the site easier. The creators noted

that the creative team was all female, and the comic may have been slanted slightly more towards a female readership than Ménage à 3, although the differences may be subtle.

The title character of the comic is the (very, very) Camp Gay aspiring actor Dillon O'Brien, and many of the strips concern his romantic life, and especially his new relationship with his neighbor Jerzy. However, much of the drama involves the second lead character, his room-mate and fellow actor, the ex-porn star Amber Larose, and especially the unexpected appearance of her younger sister Ruby, who moves into their apartment while searching for a job in the city. As they don't have a spare room, Ruby initially shares Amber's room, threatening to put a crimp in Amber's hope for a love life, which is already complicated by her difficulty in getting to know men outside of the porn business. A bigger issue soon turns out to be Ruby's personality, which can make her difficult to live with — and the history which explains this, and which occasionally makes the relationship between the two sisters quite soap-operatic. (Ruby certainly isn't going to treat Amber as a Cool Big Sis if she can help it.) Dillon sets out to make friends with Ruby, although this gets a little weird a lot of the time, leading Ruby to develop her capacity for snarkiness; they each end up learning something from the other.

Like the parent comic, this is constructed as a very traditional four-panel strip (the western equivalent of a Yonkoma); there are always four panels, or occasionally some double panels. Originally, they appeared online as a single row of four, but since a major Website redesign in early 2020, they have been posted in a 2x2 layout. (As the print collections have always been printed with this 2x2 format, any double panels are always located in positions 1 and 2 or 3 and 4.) Also, the great majority of strips end with some kind of comedy punchline, despite the fact that there is a continuing story.

The first strip is here

. In mid-2016, the comic went onto indefinite hiatus, as the creators keep getting distracted by paying work.

It returned in 2018 (with strips at that time cross-posted to the Ménage à 3 site, though eventually it was moved entirely to its own area as part of a site reorganisation), all entirely by Giz as Shouri had other commitments. It finally wrapped up at the beginning of 2019. Pixie Trix Comix, which started after the end of Ménage à 3 in April 2019 as a follow-up to that comic, may also be to some extent a sequel to Sticky Dilly Buns, sharing some characters and locations.