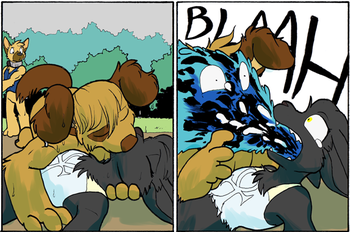 Naota: What did you do to me?!
Haruko: CPR. What do you think I did?
Naota: That's not what I meant.
Mamimi: Did she put her tongue inside?
— FLCL, "Episode 1"
Advertisement:

A character has been rescued from some sort of danger, but they are now unconscious. Their rescuer, giving up on other ways of reviving them, attempts artificial respiration

, also known as the kiss of life. Predictably, the unconscious character awakens at the exact instant their lips press together. Hilarity Ensues.

Distinct from Dude, She's Like in a Coma in that the rescuer isn't actually attempting to really kiss the rescuee. See also Indirect Kiss and Intimate Healing. Sometimes doubled up with some CPR: Clean, Pretty, Reliable for extra drama.

Sometimes happens with a pair of straight male characters, for the Ho Yay misunderstanding goodness.

In several cases, a character will fake drowning, in an attempt to get an opportunity to kiss a certain someone. Usually, they'll either mess it up and actually come close to drowning, or wind up with the "wrong" person trying to resuscitate them. In Real Life, this would never work. Lifeguards and other people trained in CPR are trained to look for signs of breathing before they ever begin. Furthermore, most carry a "Breath Barrier" which is designed to prevent the transfer of bodily liquids that could contain pathogens. Finally, if you are so determined to get that kiss that you legitimately stop breathing, well, we have tropes for that too.

Dilbert resuscitates the Pointy-Haired Boss after he becomes part of a carnival dunk tank. The crowd is amused for the potential gay moment.

Dilbert resuscitates the Pointy-Haired Boss after he becomes part of a carnival dunk tank. The crowd is amused for the potential gay moment.