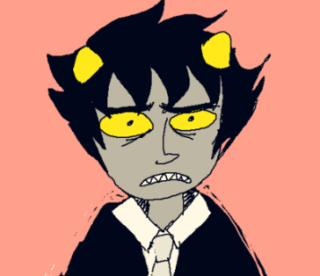 illustrated by the former and written by the latter two (with a great deal of content to still be blamed on Shelby). Please be prepared for an adventure full of hilarious japes and gentle frivolity, such as punch-spiking, dance-interrupting, fondly admiring ass-lacks, and the Unbearable Karkat Vantasness of Being. It is important to note that this is based off the Marchingstuck continuity, so if you are baffled as to why this High-School A.U. constantly brings musical instruments into everything, Marchingstuck may be worth a read. Perhaps you are baffled anyways. This is normal.

Promstuck functions like a 'classic' fan adventure: many of its commands were submitted by the readers, which the team dutifully followed. This can explain the reasons as to why the characters die, offer everyone they meet bacon and jelly sandwiches and seem to be propelled around by Hearts Boxcars (you wouldn't believe the number of times Hearts Boxcars seems to pop up in the commands box).

CRISIS MODE! PRESS A PRESS A