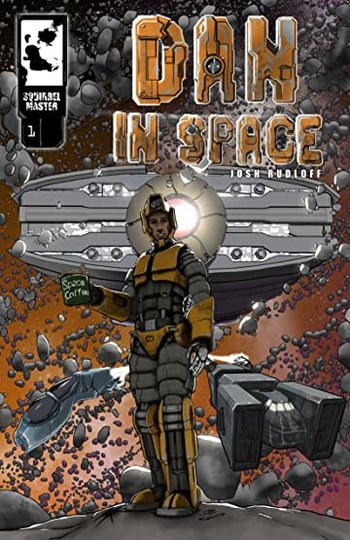 Dan In Space is a Science Fiction Comic Book by Josh Rudloff.

Dan Johnson is a low-level corporate schlub who's office just happens to be a spaceship at the edge of the universe. And in this universe, it's not the most exciting job. He's a technician who has to deal with his nagging partner, Joules, and Komputer, the ship's A.I. who likes to play music at inappropriate times. The only thing that he has to look forward to is his next cup of coffee.

All he wants to do is leave his life and job behind and have some excitement. Well Be Careful What You Wish For, Danny boy!

The comic was funded on Kickstarter on April 10th, 2012. It was published in May the same year.

Dan In Space contains examples of: