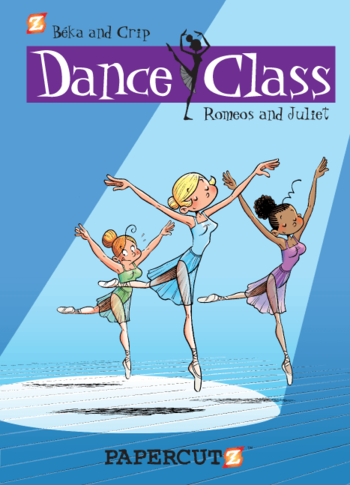 Dance Class (French Title: Studio Danse) is a French graphic novel series written by an author duo under the pen name Béka (Bertrand Escaich & Caroline Rogue) and drawn by an artist simply known as Crip. The book is published by Bamboo Edition in its home country and translated and published in the Western market by Papercutz.

The series is, well, about a dance class and all the different forms of dance studied and practiced by the students—the dance school seems to offer everything from ballet to hip-hop to Tecktonic to African folk dancing (and etc.). Following the main trio (three BFFs named Julie, Alia and Lucie) as they go through lessons, participate in plays/recitals and sometime inadvertently apply their skills to daily life with usually hilarious results. Essentially, it's a slice of life series but with quite the interesting look into the world of dance.