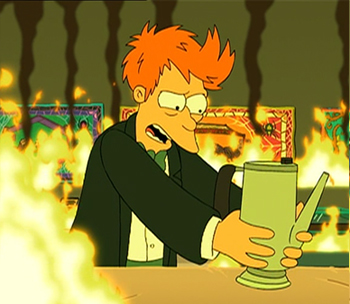 Ah, caffeine! Truly one of the greatest gifts of nature. It allows us humans to surpass the limits of our endurance when we need it most, and it has become a sort of lifestyle for a lot of us.

As a result of these special qualities, coffee and associated paraphernalia like coffeepots, coffee mugs and paper coffee cups with plastic covers have become a ubiquitous feature of every office setting. Oftentimes when points are being discussed, one or more of the participants will have a mug in hand. Important things happen around the office coffeepot, and the number of paper cups at an employee's desk is often used as a visual indicator of how much stress he or she is under. For some reason, other drinks are not considered to be as representative of our reliance on caffeine as good, strong coffee, even if some teas and soft drinks actually have more caffeine.

Outside of the office, people of all professions have also been depicted as being dependent on caffeine — to the point where attempts to drop the habit are used as a dramatic device. In certain works, something other than coffee may be used (such as soda), including obvious stand-ins used where real caffeinated beverages would be out of place.

Sudden and unexpected deprivation of this essential substance, on the other hand, is sometimes depicted with comedic consequences, such as sleeping or lobotomized workers.

There are some theories that the Renaissance and the Industrial Revolution only occurred because the Western world discovered coffee.

People who actually dislike coffee generally only turn up in fiction as a literal punchline to the old "do you want to come in for coffee" joke. Or they're British.

In the real world, the effect of caffeine on people can differ greatly based on individual genetics. Some people react very strongly to even small amounts of caffeine with jitters, racing heartbeat, and anxiety. In contrast, an estimated 10% of all people metabolize caffeine so quickly that they don't experience any effects at all.

Compare: Brits Love Tea, G-Rated Drug, Caffeine Bullet Time, Klatchian Coffee. See also Gigantic Gulp. Often the only means of defying Not a Morning Person. This trope is usually the only reason people tolerate coffee that's Bad to the Last Drop. Caffeine Failure is when the caffeine won't work for one reason or another. It's often treated as an antidote for Sleep Deprivation — or a way to cause it.

Goes without saying, since Juancho is always holding a cup of coffee. While it's normal in Colombia for children to drink coffee with milk in the mornings, Juancho is clearly overdoing it.

Alternative Title(s): Must Have Coffee

Goes without saying, since Juancho is always holding a cup of coffee. While it's normal in Colombia for children to drink coffee with milk in the mornings, Juancho is clearly overdoing it.