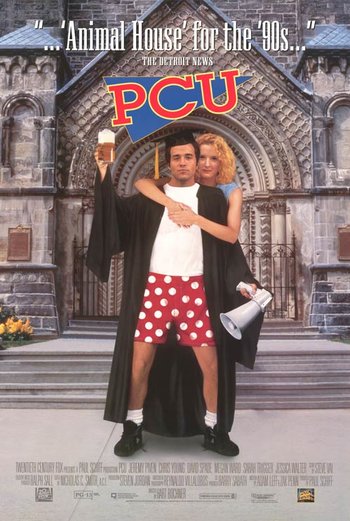 Flunk 'em if they can't take a joke.
Advertisement:

A 1994 college comedy film that could be described as Animal House meets the clashing of right-wing and left-wing politics of The '90s.

Tom (Chris Young) is a pre-freshman having a visit to Port Chester University before he attends it properly. Hilarity Ensues as he manages to piss off half the campus, with his only safety between two groups, which themselves hate each other: the groups are The Pit, a group led by James "Droz" Andrews (Jeremy Piven) who just want to goof around (and to get around the ban, it doesn't call itself a fraternity); and Balls and Shaft, a right-wing fraternity that went underground, headed by Rand McPherson (David Spade). Both groups were spun off from Psi Kappa Mu after fraternities were banned from the school in the late 1960s.

However, Balls and Shaft has the allegiance of Ms. Garcia-Thompson (Jessica Walter), the left-wing school president, at least in the sense of both hating The Pit. And they have a good plan on getting rid of it.

Not to be confused with Pawtucket Credit Union