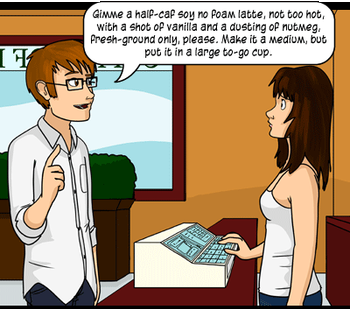 "Oh, what, I have to be an employee to haze the rookie?"
"I bet that when serious heroin addicts go to purchase their heroin, they do not tolerate waiting in line while some dilettante in front of them orders a hazelnut smack-a-cino with cinnamon sprinkles."
— Dave Barry, "Decaf Poopacino"

A character makes an order in a restaurant or cafe that is so ludicrously complicated it'll be a wonder if the waiter/barista/cashier can remember half of it. This is frequently used to show pretentiousness on the part of the one making the order, though Rule of Funny is often just as likely an explanation.

This is done particularly often with espresso beverages, custom cocktails, and food with overly-precise details, although incidents of the character ordering off the menu also count. It frequently involves Hash House Lingo and/or Sommelier Speak for extra convolution.

See also Must Have Caffeine, Drink-Based Characterization, and Real Men Take It Black. May be a trait of an Unsatisfiable Customer. Compare Complexity Addiction which has a similar theme, but with plans instead of food/drink. Compare and contrast Cordon Bleugh Chef when it's the chef that likes to be overcomplicated (and with often disastrous results).

Bubble Bass' order is so utterly complex and indecipherable that Squidward downright gives up trying to write it down.

Bubble Bass' order is so utterly complex and indecipherable that Squidward downright gives up trying to write it down.