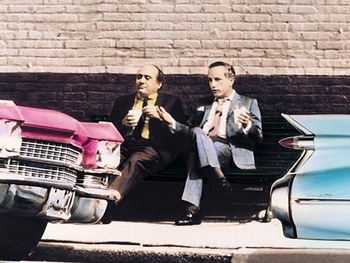 Looney: You and your lovely wife might have been asking yourself, "Exactly what are the benefits of aluminum siding?"
Cheese: It won't chip, peel, blister, crack, flake or rust in any way.
Gil: The only maintenance you'll ever have is to wash it down twice a year with a hose.
Mouse: It affords much greater insulation, which means it cuts down on your heating bills.
Gil: I'll tell you what; only on this sale, I'll throw in a garden hose on this sale.
Advertisement:
Mouse: Let's do some business.
— Montage of salesmen

The title is a slang term for aluminum siding salesmen, which both Bill "BB" Babowsky (Dreyfuss) and Ernest Tilley (DeVito) are, for different firms in 1963 Baltimore. Early in the film, BB buys a new car, only to be immediately rear-ended by Tilley as he's backing out of the lot. The two immediately get into an argument, and it eventually leads to an Escalating War between the two, which includes BB seducing Tilley's wife Nora (Hershey). The film also shows the lengths salesmen go to get a sale, which leads to a government investigation.

This is the second in Levinson's Baltimore trilogy (following Diner), and like the previous film, was well received for its Seinfeldian Conversation and its performances.