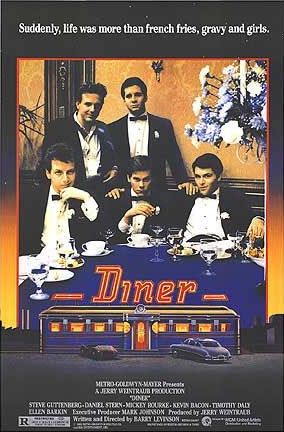 For the pinball machine from Williams, click here.
"I'm buying at the diner."
Advertisement:

Diner is a 1982 semi-autobiographical Coming of Age film by Barry Levinson set in Baltimore in the last week of 1959. It's about six friends: Boogie, a gambling addict who works at a beauty shop, is a law school graduate, and is the closest among the group to a ladies' man; Eddie, who's getting married, but is making his bride-to-be pass a test about the Baltimore Colts before the ceremony; Fenwick, a rich screw-up; Modell, the Deadpan Snarker hanger-on; Shrevie, who works at an appliance store and is the only one of the group who's married (to Beth), though not happily; and Billy, who comes back from college for the prospective wedding, and has his own woman problems with Barbara, who works at the local TV station.

Though not a big hit on release, thanks in part to Executive Meddling, this became a cult hit on video, and helped launch the careers of Mickey Rourke (Boogie), Steve Guttenberg (Eddie), Kevin Bacon (Fenwick), Paul Reiser (Modell), Daniel Stern (Shrevie), Ellen Barkin (Beth), and Tim Daly (Billy). It's also one of the first films to feature Seinfeldian Conversation, and according to many of its fans (including Judd Apatow, Nick Hornby, and Jerry Seinfeld himself), may be the Ur-Example.

Levinson later shot a pilot for a proposed TV series, but the series was never picked up. However, Levinson announced he would turn the movie into a Broadway musical, with songs by Sheryl Crow.