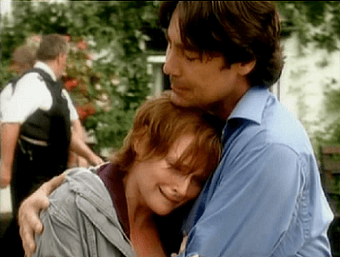 Boy, has she had a bad day.
"Thirty years of karate. Combat experience on five continents. A rating with every weapon that shoots a bullet or holds an edge. Still haven't found any defense to Mom crying into my shirt."
— Michael, Burn Notice
Advertisement:

A variant of the Security Cling, but differs a bit in timing and execution. Usually, this will take place after a large emotional ordeal when some character, in search of some catharsis, will finally just break down and bury her head into someone else's chest, sobbing and weeping.

There are two main varieties. If the character whose shirt is being used as a handkerchief is male, the character crying will frequently be female, and the reason this situation is occurring is due to a height differential, since men are on average taller than women. The point will be to accentuate the guy's stronger, more protective attributes. Frequently, the two are a couple, and in this case, it will serve as a sort of Cry Cute.

If, on the other hand, the chest belongs to a woman, the relationship will be closer to that of a mother and child, and the woman's more motherly attributes will be emphasized. This case is far less likely to be between love interests (though there are exceptions), and the two characters are a bit more likely to be same-sex. If a woman's more "motherly attributes" wind up in a character's face by accident, it's a Marshmallow Hell.

In another variation, the chest belongs to a person who has just died and this trope becomes a variation on Pietà Plagiarism as the crying person mourns them.

In all forms, this trope is likely to double as a Tear Jerker and Heartwarming Moment for the audience since it often serves double duty as a Sadness Trope and a Love Trope.

A Sub-Trope of Cry Cute and The Glomp. Compare Funbag Airbag.

After Anne yells at the frogs, newts, and toads for not working together, Anne sobs in Sasha's arms as she hugs Anne comforting her.

After Anne yells at the frogs, newts, and toads for not working together, Anne sobs in Sasha's arms as she hugs Anne comforting her.