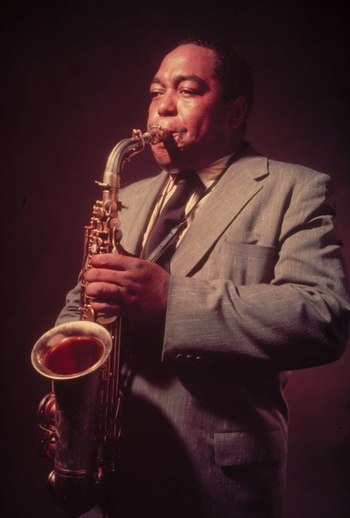 The Bird
You can tell the history of jazz in four words: Louis Armstrong. Charlie Parker.
—Miles Davis
Advertisement:

Born in 1920 in Kansas City, Missouri, Parker began playing the alto saxophone in his teens. When he was 17, he attended a notoriously tough and competitive jam session at the Reno Club in Kansas City, during which he lost track of the chord changes in the tune he was playing. Drummer Jo Jones, a seasoned performer who was playing in Count Basie's band, became so disgusted that he threw a cymbal at Parker's feet to run him off the stage. This incident has become enshrined as part of Parker's legend, because the humiliated Parker went away and committed himself to a ruthless practising schedule in which he taught himself to play every tune he knew in every key possible. A year later (or so the legend goes), Parker returned to the same session and, this time, nobody threw a cymbal at his feet.note This incident has been mutated in jazz mythology to the point that in many versions of the story, Jones threw the cymbal directly at Parker, but anyone who was there on the night agrees that Jones didn't throw the cymbal at Parker, but at the floor, in a gesture intended to be deliberately humiliating but not violent. Nevertheless, in the 2014 movie Whiplash, the teacher throws a cymbal directly at his pupil in a gesture intended to evoke the Parker incident.

Parker moved to New York City and secured a place in the Earl Hines Band. He frequented Minton's Playhouse in Harlem, where musicians like Dizzy Gillespie, Thelonious Monk and Max Roach met to play a new, hard-edged style of jazz which would become known as bebop. Gillespie in particular became a friend and collaborator, and the two regularly played as sidemen on each other's recordings.

Parker became known for his exceptional musical skill. With his knowledge of music theory, he developed complicated harmonies based on sevenths, ninths and thirteenths and improvised incredibly fast solo choruses. He admired the music of contemporary classical composers like Igor Stravinsky. He made many recordings in his short career, and while fans often prize the later recordings he made with strings for the Verve label, musicians generally regard the sessions he did between 1945 and 1948 for Savoy and Dial as being his most essential work.

Unfortunately, Bird struggled with substance abuse for much of his adult life (some stories even describe how he would pawn his horn to pay for drugs). Parker was unusual in that drugs and alcohol didn't usually impair his playing, although one 1946 recording of "Lover Man" features an extremely drunk and strung-out Parker barely able to shape a phrase with his usual confidence.note Charles Mingus loved this recording, although Parker himself hated it because it was so uncharacteristic of his usual sound. Parker's substance abuse contributed to his early death at the age of thirty-four.

Parker was a friend and mentor to many younger musicians, the most notable of which was Miles Davis, whose tune "Donna Lee" was first recorded by Parker. Parker himself composed several bebop tunes, nearly all of which have become standards in the jazz repertoire: "Ah-Leu-Cha", "Anthropology", "Confirmation", "Ko-Ko", "Now's the Time", "Scrapple from the Apple", "Relaxin' at Camarillo", and many others.

Albums by Charlie Parker with their own page: