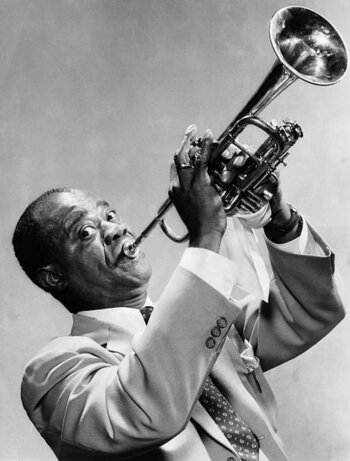 "He was born poor, died rich, and never hurt anyone along the way."
— Duke Ellington
Advertisement:

Louis Daniel Armstrong (August 4, 1901 – July 6, 1971) was a massively influential American jazz musician and singer. Born in New Orleans, he learned how to play the trumpet and cornet in his teens, and engaged in a fifty-year career in music. He is considered the Trope Codifier for many of the basic elements of jazz, including improvisation and scat singing.

His biggest hit was "Hello, Dolly!", from the 1964 musical of the same name, which knocked The Beatles from the top of the Billboard chart and earned him a Grammy Award for Best Male Pop Vocal Performance. Nowadays, his most well-known contribution to pop culture is probably his 1967 song "What a Wonderful World", which is frequently employed for soundtrack dissonance in film and television.

He was the first African-American to host a nationally broadcast radio show in the The '30s. He also had appearances in such films as High Society and Hello, Dolly!, and a few where he played himself: New Orleans, The Five Pennies and A Song Is Born. He performs in the 1960 concert film Jazz on a Summer's Day, filmed at the 1958 Newport Jazz Festival.

Note that although he's commonly known these days as Louie Armstrong, most jazz aficionados are careful to pronounce his first name Lewis. This can be Serious Business among those who see the "Louie" nickname as cartoonish and disrespectful. Armstrong himself wasn't particularly bothered, although he favoured the "Lewis" pronunciation.

Not to be confused with the muscle-bound Strong-Arm Alchemist whose skills were passed down through the Armstrong line for generations!! Also, he is not related to Neil Armstrong or Lance Armstrong. (For the record, the latter's real surname is actually Gunderson.)

Tropes found in his music and career include:

And I think to myself... what a wonderful world.