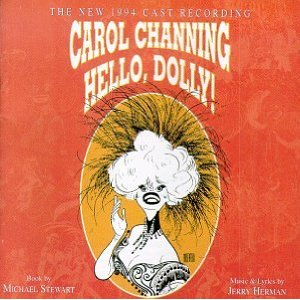 Sullivan: Where to, Dolly?
Dolly Levi: Yonkers, New York, to handle a highly personal matter for Mr. Horace Vandergelder, the well-known unmarried half-a-millionaire.
Sullivan: Gonna marry him yourself, Dolly?
Dolly Levi: Why, Mr. Sullivan, what ever put such a preposterous idea into my head ...er, your head!
Advertisement:

This famous 1964 musical, adapted by Jerry Herman (music) and Michael Stewart (book) from a Thornton Wilder play, The Matchmaker (itself based on an Austrian play, Einen Jux will er sich machen, which was in turn based on an earlier English play, A Day Well-spent), tells the tale of matchmaker and zany manipulator Dolly Levi (originally played by Carol Channing on Broadway). It's the turn of the 20th century in New York City, and after years of making matches for others she's out to make one for herself with the above-mentioned merchant Horace Vandergelder. In the process of doing so, she helps three other couples get together.

The 1969 film version was directed by none other than Gene Kelly and starred Barbra Streisand as Dolly and Walter Matthau as Horace. Modern audiences, however, will probably recognize footage from the movie due to its use in the Pixar film WALL•E. This movie is notable for being the first major motion picture to see release on the VHS format.