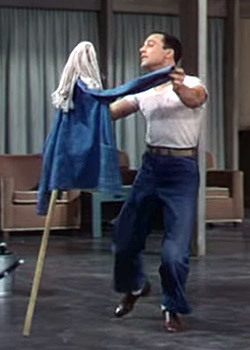 The warden said, "Hey, buddy, don't you be no square
If you can't find a partner use a wooden chair."
— Elvis Presley, "Jailhouse Rock"
Advertisement:

Just because something is nonliving doesn't mean it can't be part of a song. This trope happens mostly in musicals and operas, when a character interacts with an inanimate object during a musical number. It exists partially to make a scene look more realistic. For instance, which would be more effective: a character who is carrying a broom and instantly stops using it just to sing a song, or a character who is carrying a broom, starts singing and incorporates the broom into the song? Most musicals would choose the latter.

This trope exists in two forms:

Note: This trope incorporates inanimate objects as part of the choreography of a musical number. If a number uses such objects as musical instruments or use them for percussive reasons, it is not this trope, it is an example of Everything Is an Instrument. Compare Dancing with Myself.