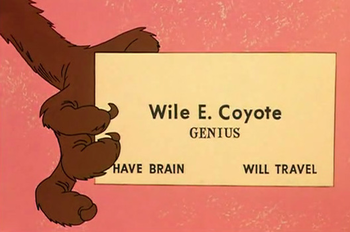 Grytpype: My Card.
Neddie: But it's blank.
Grytpype: Business is bad.
— The Goon Show
Advertisement:

The scene usually plays out as follows:
Character #1 meets character #2 for the first time. Character #2 gives their name... their occupation... their credentials... and then "let me give you..." You guessed it, "My Card." Now it's official. Everything they said about themselves must be true. There's the proof in black and white.

This is a compound trope at best; sometimes there's a card, sometimes not. Sometimes it's just a membership card or other form of identification that's presented, but not given. Sometimes they say something else when it's presented... but you get the idea. If the card itself is important it occasionally becomes Chekhov's Gun if the recipient discovers later they need its information.

Some variations to consider:

Sometimes, one can be used by a Death Dealer who is not into card games otherwise. Compare Calling Card and Membership Token. See also Verbal Business Card.