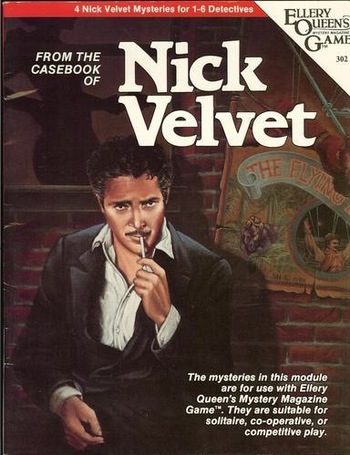 Nick Velvet is the protagonist of a series of short stories by Edward D. Hoch. Nick is a professional thief for hire, with a peculiar specialty: for a flat fee, he steals only objects of negligible apparent value. Since his first appearance in Ellery Queen's Mystery Magazine in September 1966, he has stolen such things as an old spiderweb (which he was then obliged to replace), a day-old newspaper, and a used teabag. His original fee for a theft was $20,000. In 1980 he raised it to $25,000 at the urging of his long-time girlfriend Gloria (who met Nick in 1965 when he was burgling her New York apartment); in the 21st century his fee has risen to $50,000. Unlike many fictional thieves, Nick usually works alone on his thefts — in fact, until 1979 Gloria believed that Nick worked for the U.S. government.

The Nick Velvet caper stories generally combine a near-impossible theft with the mystery of why someone would pay $20,000 to have an apparently valueless item stolen. Although Nick often appears as devoid of curiosity as his targets are of value, circumstances usually force him to identify his clients' true motives, making him as much of a detective as Hoch's more conventional characters. Most of the Nick Velvet stories have a light and humorous tone reminiscent of Leslie Charteris' early stories of The Saint. The fundamental immorality of Nick's chosen profession is frequently offset by the larger justice resulting from his detective work.