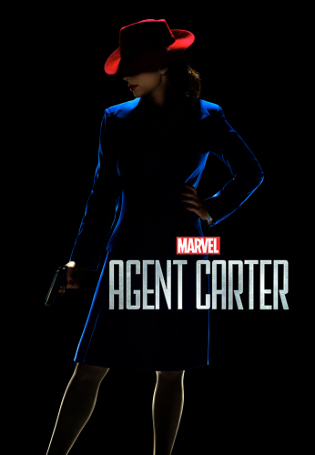 While the star-spangled man with a plan is away, the red, white, and blue lady shall defend the USA.
Hugh Jones: I didn't know our government had such good taste in secretaries. What's your name, darling?
Peggy Carter: Agent.
Advertisement:

It is 1946, a year after the end of the war and the disappearance of Captain America. Thousands of trained men and women have come home from fighting, looking for a new place to use their skills. One of those is Peggy, still despondent after the loss of Steve and hampered from getting a better job by the misogyny of the times. But in between tedious office work for the SSR, Peggy is contacted by her old friend Howard Stark, eventual father of Tony Stark, who needs her help in clearing his name and finding whoever is stealing his restricted weapons. Accompanied by his butler Edwin Jarvis, Peggy puts her skills to the test, beating up bad guys and laying the foundation of S.H.I.E.L.D. itself.

In Season 2, the setting shifts to 1947's southern California, with Peggy uncovering a new conspiracy while working for the new Los Angeles SSR branch. D'Arcy as Jarvis and Cooper as Stark return, along with new castmembers Wynn Everett as Whitney Frost, Lotte Verbeek as Ana Jarvis, and Reggie Austin as Jason Wilkes.

The series was initially tested out with a Marvel One-Shot short of the same name released with the Iron Man 3 Blu-Ray in fall 2013. The executive producers of the show were Michele Fazekas and Tara Butters, Steve McFeely and Christopher Marcus (writers of the Captain America movies), and Jeph Loeb.

The first season, consisting of eight episodes, aired from January 6 to February 24, 2015, while the second season, consisting of 10 episodes, aired from January 19 to March 1, 2016. The series was cancelled on May 12, 2016 after its second season. Although numerous plot pointsnote such as who shot Thompson and why they wanted the redacted dossier on "M. Carter", and the fate of Dottie Underwood after her escape have as such never been resolved, we do learn some of what happened to Peggy and Howard after the events of the show in Captain America: Civil War and Avengers: Endgame.