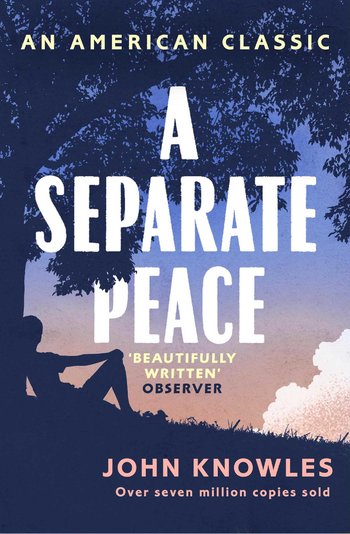 Nothing endures, not a tree, not love, not even a death by violence.
"Looking back now across fifteen years, I could see with great clarity the fear I had lived in, which must mean that in the interval I had succeeded in a very important undertaking: I must have made my escape from it."
—Gene Forrester
Advertisement:

A Separate Peace is a 1959 coming-of-age novel by John Knowles. The events of the book take place from the summer of 1942 to the late winter of 1943.

Gene Forrester, a student at the Devon School, becomes jealous of his popular and athletic best friend Phineas. His paranoia brings him to believe that Finny is secretly envious of his academic prowess and is attempting to sabotage his streak of good grades, as this would justify his own resentment. This leads Gene to commit an act of violence that has tragic consequences for both him and Finny.

Surprisingly required reading in a lot of high schools, despite the Homoerotic Subtext. The book is based on two short stories Knowles had previously written, "A Turn with the Sun" and "Phineas." It has been adapted into two movies of the same name, once in 1972 and again in 2004.

Many examples below discuss major twists at length. Do not continue reading if you want to avoid spoilers; some are still unmarked.

A Separate Peace contains examples of: