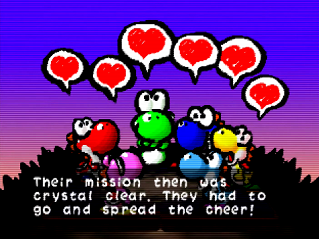 My Little Pony: Friendship Is Magic, "A Friend in Deed"
Advertisement:

Bob really likes happiness. Not only for himself or for his loved ones, but for everybody. Since it's often impossible to let everyone be happy, he'll settle for as much happiness as possible to as many as possible. Hence, an entire system of morality based on the pursuit and spread of happiness.

While Bob might be any average guy, his desire to make happiness possible - and especially the fight against needless suffering that comes with it - might drive him to become a hero. In some interpretations of Order vs Chaos, Bob is a Chaotic Good kind of character who might clash with a Lawful Good hero who disregards For Happiness in favor of having For Great Justice as his only driving principle. A hero who in such a setting embraces BOTH For Happiness and For Great Justice, keeping a balance between them when they clash, is usually Neutral Good, although one can find both Utilitarian-type consequentialists and some fairly strict deontologists among the Neutral Good; and in general the matching of philosophy in this regard with one's position on with Order vs. Chaos is true most of the time, but not in every situation.

If the character is also promiscuous or such, it's in an Ethical Slut kind of way. One way of maximizing happiness while keeping the risks of suffering minimal is to make sure that your play (sexually and otherwise) is Safe, Sane, and Consensual.

Compare The Needs of the Many, Good Feels Good, and The Pollyanna. For more on the philosophy behind For Happiness actions see Ethical Hedonism. Compare and contrast Totalitarian Utilitarian and Happiness Is Mandatory, as well as Getting Smilies Painted on Your Soul, for when this goes horribly, horribly wrong. Contrast also It Amused Me or The Hedonist for the utterly selfish variant of this, i.e caring only about their own happiness, often in expense of others.