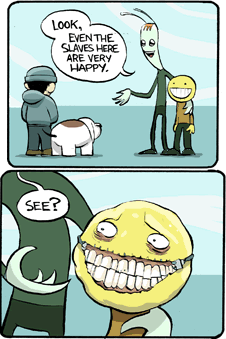 .
"The Computer is your friend. The Computer wants you to be happy. Happiness is mandatory. Failure to be happy is treason. Treason is punishable by summary execution."
— Paranoia
Advertisement:

An oppressive regime requires its citizens to "be happy". Of course, this doesn't actually make them happy; it only gives them one more thing to fear.

The regime may be small scale. For example, it might be a parent or boss. When the regime actually controls the world, it's a Crapsack World. Often without added saccharine, since "be happy, or else" doesn't actually make the world look like a happy place; in fact, it's more likely to simply highlight the depressing atmosphere even more.

Why does the regime do this? Well, maybe it is simply insane or enjoys toying with its underlings For the Evulz, or they may be trying to paper over the fact that Dystopia Is Hard. The regime is perhaps trying to combat The Evils of Free Will through Stockholm Syndrome. Or through Insane Troll Logic, because beating is so effective to control the population, it can be applied as well to emotional states. Either way, the demands for happiness tend to underscore the regime's 0% Approval Rating.

If this trope were inverted, it would be much easier for the citizens to follow - since the law itself would already give them something to be unhappy about.

See also Stepford Smiler, which this trope tends to make people into, as well as Getting Smilies Painted on Your Soul, where people actually do become happy whether they like it or not (such as through Government Drug Enforcement). Compare and contrast Finger-Forced Smile when the intent of making people smiling isn't as sinister as this trope. Also contrast Happiness in Slavery, where oppressed people somehow manage to be actually happy.

As apart of his manifesto to take over the school, Alan's ultimate goal is to rid his school of sadness by any means necessary.

As apart of his manifesto to take over the school, Alan's ultimate goal is to rid his school of sadness by any means necessary.