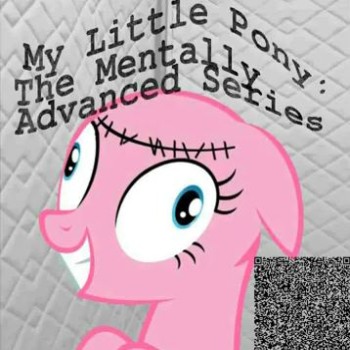 The Mentally Advanced Series is an Abridged Series of My Little Pony: Friendship Is Magic that is written, voiced, and produced by Greg Hoffman, a.k.a. FiMFlamFilosophy.

Later episodes start featuring additional people doing voices and occasionally helping Greg with editing. The series has a more adult sense of humor than the original show — which in this case does not mean it contains cluster F bombs or lots of sex jokes; rather that one needs to have attained a fairly high level of education to understand its many Genius Bonus jokes. It is a darker twist on the original's characters and concepts (some of which comes from the brony community's fanon) and features lampshading, references to H. P. Lovecraft, copious amounts of satire, and lots of dialogue that is written quite a bit above grade-school level. Much of the humor is very dry and derives from how the characters speak to each other. In fact, this is probably the "talkiest" Abridged Series in existence.

In contrast to most of the other Friendship Is Magic parodies out there, this one skips the 2-part pilot completely and just starts with the third episode ("The Ticket Master"), which means every episode number mentioned below is the same as the original series number minus 2.

In addition, Greg teamed up with Ryan "Petirep" Petrie to make the spinoff Rainbow Dash Presents, which features re-imaginings of popular Friendship Is Magic fanfiction as narrated by Mentally Advanced's Rainbow Dash. Well, narrated up to the point that she even read the story; a better descriptor would be that she skimmed it over breakfast and then decided to fill in the blanks with whatever was on her mind that day.

Mentally Advanced has a history of running into trouble with copyright enforcement. That Greg's Youtube account is monetized (unlike most other Abridgers') makes the trouble much worse and fixing it much harder. The series was blocked in the United States in late 2012 after getting caught up in "ContentID", Youtube's automated program that flags popular videos perceived to be copyright violations. Greg appealed to get the block removed but Youtube rejected his claim. He then started "Dawn Somewhere", his personal LLC, and attempted to move the series to Blip (due to its traditionally being more accepting of fair use claims), but Blip deleted his account after only a week, taking even his 100%-original-content videos with it. At that point, the series was declared to be "on life support", and Greg decided to concentrate his energy on Rainbow Dash Presents and Dawn Somewhere's other shows.

In May 2014, after 18 months of no new content (though Rainbow Dash Presents still updated), he suddenly started posting new episodes every two weeks; these episodes used still screenshots in order to speed up editing and get around copyright. Unfortunately, in October 2014, one day before his highly-anticipated parody of "Party Of One" was set to post, the series was hit by ContentID claims again, and Greg took down the episodes in order to salvage the rest of Dawn Somewhere's content. He gave his fans a few days' warning before he did so, so every episode of the series has been archived somewhere. In April 2015, he released the "Party Of One" parody at BABSCon and encouraged attendees to film it and spread it around.

Greg vowed to continue Mentally Advanced, and that (due to Petirep being too busy) he is learning to draw and use Flash in order to create new episodes that can't be auto-flagged. The first "experiment" in the new style is here.

Fittingly, it's a prequel episode. As of mid-2015, he releases about one new episode a month, along with the occasional short, starting from "Ticket Master" again. Despite retreading the same episodes, the scripts are completely different.

However, in May 2017, he announced that he was ending the Mentally Advanced Series, due to how divorced from the series it was meant to parody it got, and starting a new series called Nepotism Adventure Series, which would parody Friendship is Magic at the point it is now. Later plans for MAS and other minor details can be found here

will be the last RDP due to other commitments, but they planned a Grand Finale collaboration called "Equestria Primates", a parody of Equestria Girls. Sadly, after months of work, that project officially became vaporware when Greg and Petirep realized (1) it was taking way too long and there was no way in hell they'd finish it by the deadline, especially not with Petirep trying to go pro, and (2) it wasn't funny enough to justify all the work. There was also a second Spin-Off called Dinky Vlogs

, an in-character vlog from Dinky Hooves, though it ceased updating in 2014 due to Petirep not having time to do it.

However, it was suddenly announced that there would be a new episode of Rainbow Dash Presents, based on the fanfic "Star in Yellow" premiering on June 18, 2016, thanks to now having a team of people work on it.

This version of Applejack later appeared in the Massive Multiplayer Crossover movie of Scootertrix the Abridged along with characters from other pony abridged series.

The series can still be found on the team's website here