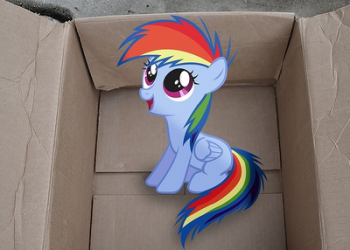 My Little Dashie is a popular My Little Pony: Friendship is Magic fanfic by ROBCakeran53, based on this art piece

In a grey, dull, dying city, one man comes across a box on his way home from work. Upon opening it, he finds a filly-fied Rainbow Dash. When he takes her home and raises her as his own, she takes his life in new directions he never imagined possible.

It has been known to be up to par with Cupcakes (Sergeant Sprinkles) in terms of notoriety, and is often considered to be the ultimate bittersweet literary contribution of the MLP fandom. It can be found both on Equestria Daily

, and a plethora of readings have been released under YouTube. It has also been heavily parodied in FiMFlamFilosophy's Rainbow Dash Presents series, found here

There is also a sequel

that gives closure to the open-ended conclusion of the original, and a "threequel"

which looks to tie up the loose ends remaining (it's worth noting, however, that these are just some of the many fics based on this work; neither the sequel nor threequel are by the original author). In addition, it has spawned a Comic-Book Adaptation, complete with its own original sequel

that the author of the original has given his blessing for. The original author has since made his own sequel: My Little Dashie 2: Dash Harder

This My Little Pony: Friendship Is Magic Fanfic contains examples of: