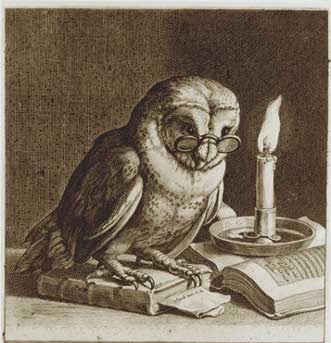 You can't spell "knowledge" without "owl."
Wise Owl by Cornelis Bloemaert II
"#1: All owls must wear graduation caps at all times. Turtles, you can wear the bowlers, that's okay, but the mortarboard is standard-issue gear for the owls."
— Tom Kenny on the laws of the cartoon universe
Advertisement:

There is a long-running tradition of using owls as a symbol of knowledge. This might be because their eyes resemble Nerd Glasses, because they are silent and mysterious, because their heads appear as round as a bald old sage's, or maybe just because Owls Ask "Who?" Most likely, though, it's because of their importance in various ancient cultures, especially the Greeks, where the owl was the bird of Athena, the goddess of, among other things, wisdom. Ironically, Athena's bird was the owl not because the Greeks themselves saw owls as wise, but because Athena's patron city Athens (and its environs) swarmed with wild little owls.

In any event, owls are usually depicted as wise and honorable and serve as mentors, teachers or advisors. Be aware, though, that they tend to share traits with the Absent-Minded Professor and the TV Genius, so take their advice with a grain of salt. There is also a tendency for owls to act as narrators/storytellers.

Compare and contrast Cute Owl (no reason an owl can't be smart and cute, and in fact that trope often portrays an owl as adorably bookish) and Ominous Owl (which may overlap if the owl is an Evil Genius). Compare to Clever Crows and Brainy Pig. See also Noble Bird of Prey, Animal Stereotypes and Woodland Creatures.

He's also the only one to suggest the application of the scientific method to the question. And then use that suggestion to get free candy.