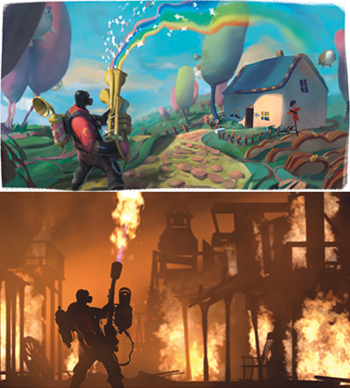 Above: What the Pyro thinks is happening.
Below: What is actually happening.
"Bad guys think they're the heroes of their own stories; they're not sitting there thinking, 'Yeah, I get to be evil today.'"
— Jeff Abbott
Advertisement:

A villain who is thoroughly convinced that their actions are mundane, acceptable or helpful, to the extent that the idea that their actions have negative consequences doesn't even occur to them. These villains aren't justifying their wrongdoings. They aren't compelled by unnatural forces. They just don't comprehend that they're doing anything wrong. This can be achieved in several ways:

There are two basic requirements for a character to be this trope:

A horror trope (and occasionally a comedy trope in a Black Comedy), this can really freak people out if played right. It may place the heroes into a situation where they can't even try to reason with the villain. It can also be used to underscore that the villain is indeed a tragic figure, as he or she or it may never have actually intended to harm anyone. Alternately, this can be used to make a creature sympathetic. You give it a valid reason for doing the things it does, and once it has that reason, it won't see what it's doing as wrong.

Some Kaiju are like this. They just wanted to build a nest and get some lunch, but they stumbled across countless strange structures and were suddenly under attack by tiny bipedal creatures. The principle is the same for many Eldritch Abominations and Humanoid Abominations, which are (usually) sentient, but their views on morality are vastly different from ours. Such a character may qualify as a case of Non-Malicious Monster or Humans Are Cthulhu. May eventually come to a Heel Realization/My God, What Have I Done? moment. On the other hand, any Curious Qualms of Conscience might wind up being dismissed as temptations away from their duty.

Very much Truth in Television — humans tend to do what they think is right based on their beliefs, regardless of how wrong those beliefs may be to outsiders or if those beliefs utilize Insane Troll Logic; and while beliefs are malleable and subject to pressure and change, pretty much nobody in Real Life is a Card-Carrying Villain explicitly thinking things like "Hmm, what evil deeds should I commit today?" or "I love being evil! Mwahahaha!"

For obvious reasons, Obliviously Evil characters are also very likely to be Affably Evil. Not to be confused with Obviously Evil.

Inverted Trope of Ignorant of the Call, when someone is oblivious to the fact that they're the Hero.