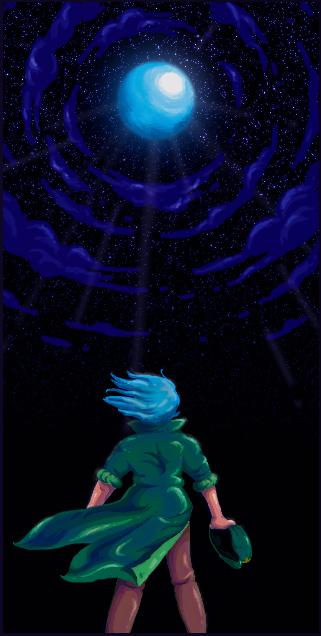 "Is there anything you'd give up everything to defend?"
Advertisement:

Immortal Defense is a Tower Defense game, with you cast as the immortal. Alright, that was easy, now for the trickier bits...

The peaceful planet Dukis is under attack by the voracious Bavakh empire, who use the extraspatial dimension known as hyperspace to quickly move their massive invasion fleets from one part of space to another. In desperation, the government of Dukis uses experimental technology to transform a brave volunteer known only as Pathspace Test Subject K into a path defender, a ghostlike being who inhabits the dimension above hyperspace, known as pathspace. From pathspace, hyperspace appears as a single line or path along which the Bavakh starships travel; objects in pathspace can interact with those in hyperspace, but not vice versa, meaning that path defenders can slaughter waves of incoming invaders with absolute impunity. The game follows K as he grows in experience and renown under the tutelage of a more experienced Path Defender named Pul Wat Aa, gradually becoming the brightest star in Dukis's sky and a beacon of hope to its beleaguered inhabitants... at least, until things start getting worse.

In 2015 the game was re-released on Steam, complete with an achievement system, a level editor, and a teaser for the dev's next game Saturated Dreamers.

This game is surprisingly deep for its genre, and explores such themes as loneliness, betrayal, insanity, and, well, we'll just let the examples below speak for it. Warning: expect blatant, untagged spoilers, because there's really no way to summarize the plot of the game without them. Seriously, if you want to get the full enjoyment out of it, go play it,

then come back here. We'll wait.