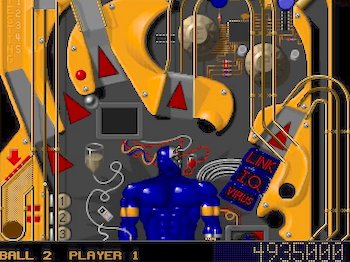 The first hit is free...
Advertisement:

Epic Pinball is a series of Digital Pinball Tables for MS-DOS computers from Epic Megagames. Released both on CD-ROM and a series of floppy disks, they are noted for being one of the last commercial games written entirely in assembly language, making for very faster and fluid action even on a modest PC. The first game was released in 1993.

As with Silverball, James Schmalz created Epic Pinball to counter the success of Pinball Dreams by using assembly language to make full use of the IBM Personal Computer hardware. Similar to Dreams, the games were played from a top-down view, either with the entire table visible at once or with a scrolling playfield two screens tall.

The first table, "Android", was available for free in the Shareware and original retail versions; paying for the game allowed users to unlock other tables. The series featured an all-digital soundtrack in MOD format and thirteen tables all together.

The tables available in the series are:

A thirteenth table, "African Safari," was only available in the CD-ROM version. A stripped-down version of Epic Pinball Pack 3 was included by Acer in their desktop PCs, omitting the "Cyborgirl" table. A Spiritual Successor, Extreme Pinball, was released a few years later.

In 2011, the game was partially remade as "Retro Pinball" by Fuse Powered Inc. for Apple's iOS devices. It features updated versions of "Super Android," "Crash and Burn," and "Pangaea", handpicked by Schmalz himself.