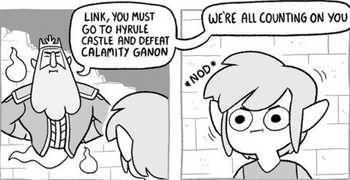 Link is more of the strong, silent type.
"... ..."
— Red, Pokémon Gold and Silver (and every game he's an NPC in thereafter)
Advertisement:

All too often in video games, it seems like designers feel that the best way to get players to relate to the main character is to have said character have absolutely no dialogue at all. Even though you can't say a word, it seems like every NPC around you instantly understands what you need like you're Lassie or something.

Heroic Mime is a video game-specific variant of The Voiceless or The Speechless. In many RPGs, the main hero doesn't seem to talk (Visible Silence might be used). The official explanation for this is that the main character is the player, and dialogue would either interfere with the player's train of thought or knock them out of the viewpoint of that character (compare the Featureless Protagonist). An aversion of this would be to allow the player to actually talk to the characters through a microphone or the AI be able to comprehend any text entered, but this is beyond current technology, except in online games where you're talking to other players instead of AIs — or through the limited means of a Dialogue Tree.

Some characters might be like this when under the player's control, but perfectly normal and talking characters as Non Player Characters, or even just when they aren't the leader of the group. And some characters do talk when the player chooses how to answer a question.

Nevertheless, this often results in the fandom discussing whether or not a character is mute. Most of the time when somebody makes a Novelization or a Webcomic of the Game, odds are that it'll have the character speak in Visible Silence and be treated as The Silent Bob.

This trope can get very frustrating when the character has, for example, undergone an Involuntary or Emergency Transformation, and has allies who weren't there to see it. It's also hard to grow too fond of a Heroic Mime since they don't show thoughts or feelings that can't be expressed with grunts, sighs, and body language. This is one thing when they're fighting all alone, without so much as an Exposition Fairy or a Voice with an Internet Connection to listen to, but when there are other characters around it's a different story. Even The Stoic says something.

One fairly common variation of this is to suggest that the main character actually does speak, we just can't hear them or see their text boxes. However, the other characters in the game can, and we can sometimes infer what was said from their reactions. Another common variation used to compromise between immersion and characterization is to allow the player character to speak, but only during non-interactive cutscenes.

How well you take this trope can often depend on how you approach video games in general. If you like to imagine you "are" the character, as the developers seem to expect, it could arguably increase immersion. On the other hand, many players prefer to imagine themselves in a role similar to that of a movie director; controlling the action without being a part of it. To them, having a Heroic Mime is like being saddled with a boring, wooden actor in the lead role.

In more plot-heavy games, they will often be paired with an Exposition Fairy who does the talking for them. Is not the opposite of Monster Clown or Enemy Mime.

This trope occasionally crops up in other media, but it may be more difficult to pull off unless done comedically.

They may or may not be an Audience Surrogate.

See Silent Antagonist, for when the villain is like this. Being a Heroic Mime does not necessarily preclude Voice Grunting or Speaking Simlish. This trope is often used in conjunction with an Unbroken First-Person Perspective.

Wheatley is checking Chell for brain damage, and asks if she understands, your only response is to jump.

Wheatley is checking Chell for brain damage, and asks if she understands, your only response is to jump.