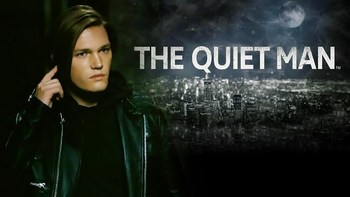 Silence Rings Loudest
The Quiet Man is an Action-Adventure game, developed by Human Head Studios and published by Square Enix for PS4 and PC on November 1st, 2018.
Advertisement:

It was a night like any other in New York City, when a man named Dane goes out seeking revenge for the death of his mother. When a mysterious figure in a bird mask kidnaps the girlfriend of Dane's best friend and it seems that he has a connection with the murder, Dane is determined to seek him out.

The game is played from Dane's point of view, and it just so happens that Dane is deaf. As a result, 95% of the game is either completely silent or heavily muted.

Not to be confused with the 1952 film of the same name.