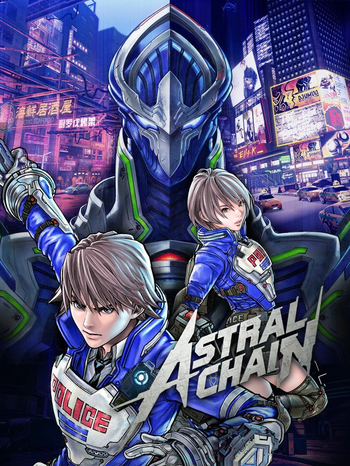 "Today has been most revelatory."
"My heart goes out to you two... All because of how you were born, you're doomed to be used by those idiots till you die. Chained to your fate, powerless."
Advertisement:

Astral Chain is a Stylish Action video game developed by PlatinumGames and published by Nintendo for the Nintendo Switch. The game was unveiled in February 2019 and was released on August 30th, 2019 in all regions.

Set in a future Cyberpunk multicultural city known as the Ark, Astral Chain focuses on a Brother–Sister Team who work for a special police task force called Neuron. Said task force was birthed in response to the formation of odd dimensional rifts that have been appearing in the world, unleashing monsters known as Chimeras who leave destruction in their wake. With normal equipment being just as ill-equipped for such a situation as standard police officers are, members of Neuron utilize a brand-new weapon known as Legion: bio-mechanical beings derived from Chimeras that acts as a partner and aids you both inside and outside of combat situations.

Astral Chain marks the directorial debut of Takahisa Taura, the chief designer of NieR Automata. Bayonetta series creator and PlatinumGames co-founder Hideki Kamiya serves as the supervisor for the game, with manga artist Masakazu Katsura in charge of the character design.

For a game with similar Legion-based combat, compare and contrast to Chaos Legion.