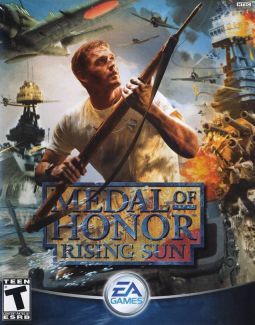 0815 Hours, December 7, 1941
"Survive the sneak attack on Pearl Harbor...Battle through the Jungles of Guadalcanal, to the streets of Singapore. Experience the powerful realities of war...with more than 20 authentic World War II weapons. Encounter intense Banzai Charges. Fight alongside Battle-hardened Allies. Featuring Co-op multiplayer modes. Defeat the Japanese Empire!"
— Narration from one of the game's trailers
Advertisement:

Medal of Honor: Rising Sun is the 5th installment in the Medal of Honor series, coming immediately after Frontline and released in 2003 on the Playstation 2, Xbox and the Nintendo Gamecube.

The game follows Corporal Joseph Griffin, who was a US Marine that witnessed the attack on Pearl Harbour and his adventures in the Pacific Theater following the assault. After serving in the Philippines and Guadalcanal, he was later recruited by the OSS to stop a Japanese plot involving Yamashita's gold. The game was slightly ahead of its time as unlike previous games, it was more narrative-driven as the plot progresses in-game rather than between missions a la Half-Life, though it did not fare as well compared to Frontline. A sequel was planned, however the idea was cancelled.

Tropes that apply for this game: