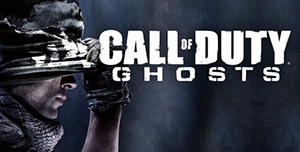 "Soldiers stand against their enemies, but ghosts haunt them."
Advertisement:

The tenth game in the popular FPS series Call of Duty, developed by Infinity Ward, Ghosts was intended to be the start of an entirely new subseries for the franchise by acclaimed writer/director Stephen Gaghan. However, his talent and Hollywood success did not extend to the first-person shooter realm, and the Ghosts brand and storyline was retired after this one installment due to lackluster sales and criticism of its plot and villains.

Ten years in the aftermath of an attack caused by turning a United States satellite weapon against the nation, much of the country lays in ruins. The severe loss of industry, infrastructure, and capital to rebuild has taken the government from one of the most elite nations in the world to third-world status. This results in a weakened military and exposure to invasion, which comes in the form of a collective of South American governments called "The Federation" (the ones who were also responsible for bringing this on the U.S. in the first place). After ten years of occupation by The Federation, what remains of the U.S. special forces are brought together to become the "Ghosts", whose mission is to use whatever means necessary to defend the tattered remains of the U.S.

A co-op game mode styled on Treyarch's successful Nazi Zombies sub-game. The game focuses on a team of soldiers sent to investigate 'hives' near the ODIN impact site, and starts a series of DLC episodes that completes the story.

Set a few weeks after the ODIN Strike on Colorado, the US military receives word of an outbreak of 'aliens' in the blast zone. General 'Godfather' Castle sends an elite team of specialists to investigate the contact site, and contain/ destroy if need be.

After the Colorado outbreak has been dealt with, Godfather tasks the team, CIF-1, to Alaska; to rescue a scientist (Dr Samantha Cross) who was recruited by Cpt David Archer for a top secret project codenamed Nightfall. In truth, Archer's project was to use the aliens, (sorry, Cryptids) to bio-engineer a new breed of Cryptid and learn how they operated. However, the captive Cryptids escaped, killing almost all that were present, except for Archer, Cross, and a few surviving soldiers.

After securing Cross, Archer was able to obtain a Chinese decommissioned Destroyer, the Stormbreaker, which he planned on using to reach an 'Ark' containing the Cryptid leaders, and planned on using Cross as a beacon due to her unique gifts. However, Cross became too powerful, and after almost 3 weeks captive, attacked the ship using the Cryptids. Archer issued a Mayday, calling for aid from Godfather, who sent CIF-1 to extract him and eliminate Cross. Cross escaped with help from a massive Cryptid beast – the ‘’Kraken’’, and fled to the Ark, now known to be ‘’Ball’s Pyramid’’.

Archer led the charge towards the Pyramid, but his team were ambushed. With most of his team dead, Archer is approached by Cross, who wants to make a deal with him and Godfather. Archer and Cross head to the main chamber, where they meet the Ancestors, the Cryptid commanders. After losing contact with them, Godfather sends CIF-1 to extract the pair and recover the Cortex, a device capable of combating the Cryptids, created from the autopsied remains of an Ancestor’s brain. CIF-1 fought off wave after wave of Cryptid soldiers, decrypting obelisks and scouring the maze-like pyramid, before finding Archer and Cross in the command room. Cross leaves Archer to die in the pyramid as retribution for his actions towards her, and the five escape the pyramid with the Cortex.

However, their victory pales in comparison to what they have unleashed. In firing up the Cortex, they activated every beacon in every Ark across the planet, and in doing so, have inadvertently caused the Extinction of the human race. Godfather tells the US President that the only option left at this point is ‘’Scorched Earth’’, and reminds the President that they too had an Ark, waiting right over their heads.

As the extinction of humanity commences, CIF-1 fights their way to the Exodus launch site, fending off attacks from Cryptids and even facing off against the Ancestors themselves. Fighting through the obliterated streets of San Francisco, they must recover the 'Cortex' prototype and defend the shuttle from the aerial Cryptids, before it reaches low Earth Orbit.

As the team re-power the generators left by the astronauts in order to power up their superweapon, they learn of the fate of Samantha Cross, and watch as she heads off into space, leaving CIF-1 to die on the Earth.

This game mode provides examples of: