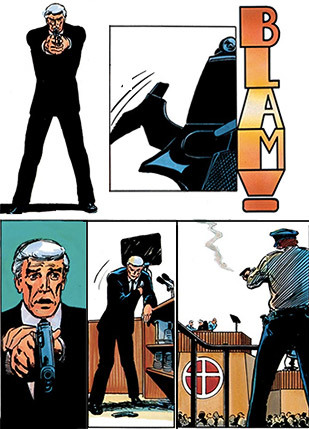 Someone is pointing a gun at our hero. Our hero is rooted to the spot, either trying to talk to the gunman or frozen with fear. The gunman points without shooting for a while, then BANG! there is a loud gunshot. The hero jerks in fearful anticipation and a few seconds pass before they realise - they aren't hurt at all.

One of five things happens then:

Not to be confused with Staged Shooting, which is generally where both the shooter and the target are acting to make non-lethal ammo look real. See also Framed for Heroism. If the person doing the shooting in instance (1) is actually the hero, then we have a case where the villain Thought They Won A Gunfight - Thought Wrong.

In a Metro article on 14 August 2007 providing a list of action movie cliches, this was called "Third Person Shooter". Roger Ebert's book of film cliches, meanwhile, calls it "In the Nick of Heroism".

Sometimes a Sub-Trope of Conveniently Timed Attack from Behind. Compare Bullet Holes and Revelations. Sometimes related to Shoot Your Mate. Can lead to a lot of Superdickery if used in a commercial or as the ender to a multi-part episode. For white weapons, see Stab the Scorpion (which are specifically similar to type 2 of this trope). Compare the Blofeld Ploy, where the villain sets up the expectation that he will kill one mook, but then kills a different one entirely.

Also see Fake Kill Scare, where someone's death is faked to frighten a loved one.

Note that this trope applies equally well for other missile weapons though they don't show up as often (mainly because they don't usually have a dramatic "BANG!" to pull the fakeout with. When the shot connects but has a very unexpected effect, it may be a ranged version of the Healing Shiv or Abnormal Ammo.