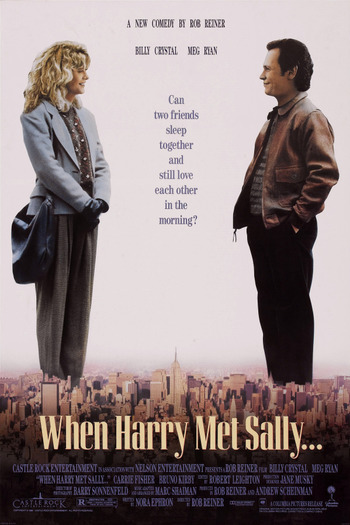 The poster so nice, they used it twice.
"I'll have what she's having."
Advertisement:

Deadpan Snarker Harry Burns (Crystal) and Wide-Eyed Idealist Sally Albright (Ryan) first meet in 1977, when they share a drive from college in Chicago to New York City. He's seeing her friend Amanda and comes on to her; she turns him down but says they can be friends. He points out that the guy friend will always be attracted to the female friend and want to sleep with her, thus they decide not to be friends. They revisit the question five years later when they happen to find themselves sharing an airline flight, once again resolving that no, they cannot.

Five years after that, they re-meet after having been dumped by their other halves, and become friends. They resolve to just be friends... for most of the movie they succeed in this. Their relationship has little sexual tension, and is punctuated by extended conversations where they discuss love, friendship, scatological humor and Casablanca. The Aesop seems to be that people really need friendships- the nonsexual comfort zone Harry and Sally establish with each other is what allows them to move on from their failed relationships. To each other, in case you haven't figured that out yet.

In terms of the Romantic Comedy genre, this movie's main contribution was its popularization of Contemplate Our Navels as a form of Character Development and emotional connection — Harry and Sally are defined almost entirely by their interactions with each other. What external factors do exist they usually discuss with each other directly and personally.

Viewers familiar with the modern Rom Com may be caught off-guard, as this movie lacks the High Concept and Hotter and Sexier tropes the genre is famous for. There's almost no sex or even provocative clothing. There's vastly more scenes of people in bed, alone, wearing pyjamas and talking on the phone than getting their sex on. The "R" rating was likely due to the famed restaurant scene and couple of swearwords.

In 2011, Billy Crystal and Rob Reiner appeared in a spoof trailer on FunnyOrDie.com for When Harry Met Sally 2

, where Executive Meddling has turned a continuation of the original film into a shameless cashing in on the then-current vampire craze.