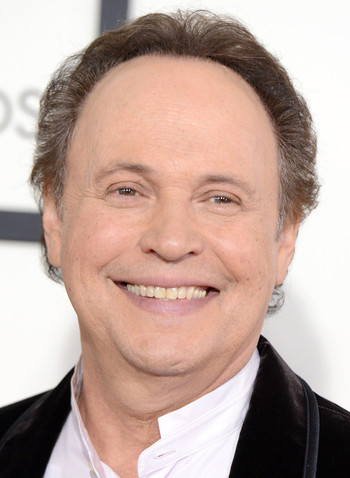 "Even when I was in school shows, in elementary school doing plays, I'd always go off book and start improvising."
Advertisement:

William Edward "Billy" Crystal (born March 14, 1948), is an American comedian, actor, writer, producer, director, and television host. He starred on the sitcom Soap and in the movies When Harry Met Sally..., City Slickers, Analyze This, and Monsters, Inc.. He has hosted the Academy Awards Ceremonies nine times, beginning in 1990 and most recently in 2012.

Billy Crystal was a cast member on the long-running NBC sketch show, Saturday Night Live, during its final season with Dick Ebersol as showrunner (1984 to 1985)note though NBC did have plans to make that season the last one ever due to Ebersol leaving over creative differences, the possibility of Lorne Michaels never coming back (which was proven false when Michaels' The New Show tanked on ABC), and critics expressing how tired they were of the show, especially since Eddie Murphy left after season nine, though he originally was going to be a performer during the show's first episode back in 1975 (and ended up getting replaced by Andy Kaufman and his famous Mighty Mouse lip-syncing piece). Crystal is also one in two cast members (joining Michael McKean) to have hosted SNL before officially joining the cast. His notable recurring characters include Buddy Young, Jr. (an insult comic who's more "insulting" than "comic"), Al Minkman (a scam artist, often paired with Christopher Guest as his brother, Herb), Lew Goldman (a Jewish-American Weekend Updatenote or "Saturday Night News" as it was called back then correspondent), and Willie (a security guard who confides in his friend, Frankienote played by Christopher Guest, about painful situations, often commenting, "I hate when that happens!"). His notable celebrity impressionsnote some of which would be considered Values Dissonance today since some of the celebrities he played weren't white and, yes, yellow-, black-, and brownface had to be done to properly achieve the look include Princenote back when Prince was a major star for the album 1999 and Purple Rain [both the movie and the soundtrack], Fernando Lamas (one of Crystal's most known impressions), Haing S. Ngor, Muhammad Ali (in a sitcom parody of Kate and Ali, where it's Katharine Hepburn and Muhammad Ali), Howard Cosell, John F. Kennedy, and Sammy Davis Jr. (another of Crystal's most known impressions, and probably the most unrecognizable. See here