All spoilers for Monsters University and Monsters, Inc. are unmarked. You Have Been Warned! 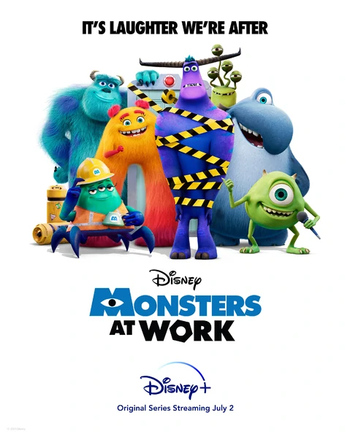 Monsters at Work is a television series based on characters created by Pixar Animation Studios and is a continuation of Monsters, Inc.. It premiered on July 7, 2021 on Disney+, running for one ten-episode season so far. It's the second TV series based on their properties, with Buzz Lightyear of Star Command being the first, and the first that Pixar themselves have produced.

Set immediately after the events of the original movie (technically an Interquel, as it precedes the original film's final scene), the power plant at its center now harvests the laughter of children to fuel the city of Monstropolis. Tylor Tuskmon (Ben Feldman), an eager and talented mechanic on the Monsters, Inc. Facilities Team, dreams of working on the Scare Floor (now the Laugh Floor) alongside Mike (Billy Crystal) and Sulley (John Goodman). The problem is that Tylor, who graduated from Monsters University, was originally brought on as a scarer, only to join right as the switch from scream to laugh occurred. Now, if he wants to be on the Laugh Floor, he's going to need to find his inner funny.

The official trailer for the series can be found here

. Cast member Henry Winkler, the voice of MIFT foreman Fritz, tweeted that a second season is currently under development

on the official Disney+ YouTube channel slating it for a 2023 premiere.

Monsters at Work provides examples of: