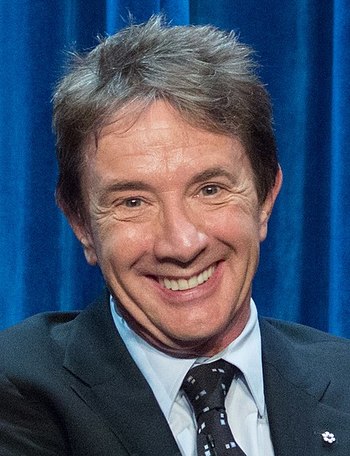 "My job is not to analyze my career. But I am proud of the amount of work I've done and the amount of commitment I've given to it. That makes me proud."
Advertisement:

Martin Hayter Short OC (born March 26, 1950) is a Canadian-American actor, comedian, singer and writer born in Hamilton, Ontario. After joining the Second City theater in the late 70s, he transitioned to television starting with SCTV and later Saturday Night Live.

His film career took off in the mid 80s when he appeared in ¡Three Amigos! alongside Chevy Chase and Steve Martin. Since then, he has appeared in Innerspace, Father of the Bride, Clifford, Mars Attacks!, A Simple Wish, The Santa Clause 3 and Frankenweenie, among many others.

His autobiography, I Must Say: My Life as a Humble Comedy Legend, was published in 2014.