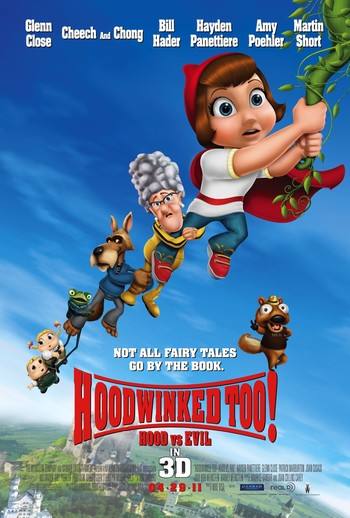 "You've been hoodwinked, too!"
Advertisement:

Hoodwinked Too! Hood vs. Evil is the 2011 sequel to the 2005 animated movie Hoodwinked!.

Now agents of the Happily Ever After Agency, Wolf, Granny, and Twitchy are assigned to rescue Hansel and Gretel from the evil witch, Verushka. Red has left the agency to train with the ancient Sisters of the Hood who guard the recipe of the legendary Super Truffle, said to make whoever eats it unstoppable. After learning that the truffle recipe has been stolen, Red learns that her Granny has been captured and is being forced to make the Super Truffles for Verushka. With her Granny in danger, Red rejoins the agency and must team-up with Wolf and Twitchy to rescue Granny, Hansel, and Gretel, and prevent the Super Truffles from falling into the wrong hands.

The film was originally set for a 2010 release date, but was delayed for over a year due to issues regarding the animation.

Hoodwinked Too! Hood vs. Evil provides examples of: