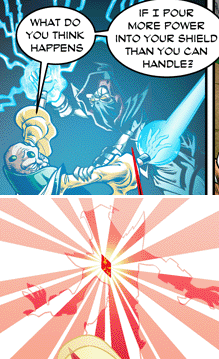 Zola: Violetta, you pathetic loser! Did you just try to poison me? Ahahahaha! As if that could stop me now!
Violetta: I know that. That wasn't poison, that was more Movit 11. Now all I have to do is watch you combust.
— Girl Genius
Advertisement:

Applied Phlebotinum is useful, so applying more phlebotinum should be more useful, right?

Wrong! When the amount of phlebotinum reaches critical mass, bad things happen. Maybe it summons an Eldritch Abomination, maybe it makes a black hole, maybe it goes more and more unstable and eventually blows up. If the phlebotinum was already dangerous, expect the danger to increase exponentially.

May cross over with Aesoptinum when the Aesop is "All things in moderation." Not to be confused with Phlebotinum Overload, which is when the phlebotinum loses stability by itself instead of causing it to someone. Superpower Meltdown is this on the individual level. See also Going to Give It More Energy. Compare Pent-Up Power Peril where the power comes from the inside, rather than the outside, but ends with similar results if care is not taken.