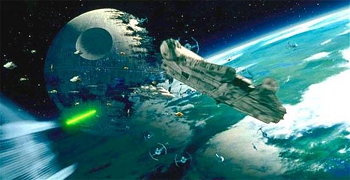 The first time, the Rebels won. The next time, the Empire won. This time, there won't be a next time.note Well, probably. Or afterwards. Maybe?
"Archers in your arches:
Raise your fingers for one last salute
And bleed this skyline dry.
Your history is mine".
— Funeral for a Friend, "History"
Advertisement:

The Fight Scene on steroids, and the perfect climax to the Action Story: the forces of Good and the forces of Evil lock swords one last time. Everything the heroes have fought for hangs on the outcome of this fight. Consequently, the heroes (and sometimes the villains) throw everything they have into winning the Final Battle.

Often, the battle itself is the object, and, other times, the battle is merely a diversion: a Supporting Leader leads the army of Good into battle so the real heroes can sneak behind the Army of Evil's back to infiltrate the Supervillain Lair and destroy the Artifact of Doom or engage the Big Bad. Oddly enough, the real heroes' success often coincides with (or even causes) their allies' victory in the larger battle.

Expect Gondor to call for aid beforehand. Expect The Cavalry or the Big Damn Heroes to make their big damn entrance. Expect someone to say "This Is Something He's Got to Do Himself," or "Leave Him to Me!" (possibly followed by a Foe-Tossing Charge). And above all, expect the "Holy Shit!" Quotient to reach previously unheard-of heights.

If the story intends to Kill 'Em All, this is where most of them will die. If they were already killed, they may get brought back for a Climactic Battle Resurrection. For an extra-chaotic battle, make it a Mêlée à Trois.

Sometimes a Final Battle is rendered not-so-final by the events of the sequels or later seasons. On the other hand, if it's the Grand Finale of a particularly long series, the Final Battle can serve as a kind of retrospective; all manner of characters from previous books or seasons will show up to participate, allowing the audience to remember all the many stories that led up to this moment.

In Video Games, this overlaps with The Very Definitely Final Dungeon and the Final Boss. Not to be confused with Final Fight. The Space Opera relies on the Space Battle, which can include this or show up at the beginning or middle of the show.

Anne, Sasha, and Marcy use the power of the Calamity Gems to take down the Core for the final time.

Anne, Sasha, and Marcy use the power of the Calamity Gems to take down the Core for the final time.