Tabletop Game / Victory in the Pacific 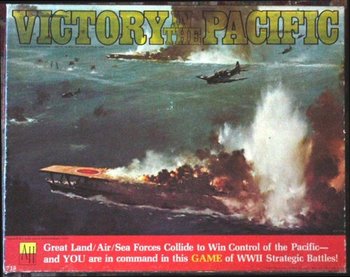 The front of the game box.
Advertisement:

A tabletop historical naval wargame of low to moderate complexity published by Avalon Hill, set in World War II and pitting Japan against the Allies in the Pacific Ocean. Designed by Rich Hamblen, it's sequel of sorts to the shorter and simpler War at Sea, which came out in 1976. The game divides the ocean into 13 sea areas and includes 22 bases (8 of which are major ports) which can change hands during the game due to isolation or invasions. All the major heavy cruisers (plus 3 of the light cruisers), battleships, and carriers that fought in the Pacific Theater from December 1941 through October 1944 are included, and each side gets land-based air wings, amphibious forces, and a submarine to play with as well. Along with Advanced Squad Leader, it's one of the last few Avalon Hill wargames to still support nationally-attended face to to face tournaments.

The Allied forces are dominated by the United States armed forces, but also include a sizable British contingent and associated Commonwealth units, plus one lone single Dutch light cruiser - the opposing forces all belong to the Empire of Japan. Scoring is by "Points of Control" (POC), which are just Victory Points by another name, with a simple aggregate determining the winner at the end (except that nobody can lead by more than 29 at the end of a turn). Generally Japan runs up a large lead early but then the tide of American reinforcements turns it back over the last few turns. Scoring points means having the last surviving land-based air unit, or patrolling ship, in a sea zone at the end of a battle. Said patrolling ships must be committed at the beginning of the turn. Ships can also raid instead of patrol, allowing them to be committed later in the turn after seeing more of the enemy's deployment, but those raiding ships do not score any POC after a battle.

Ships in VITP can described by their numerical ratings - they all have a gunnery factor, armor factor, and movement factor (speed), which are read in that order. So when the Japanese battleship Kongo is called a 436, that means it has a gunnery of 4, armor of 3, and speed of 6. Aircraft carriers also have a fourth rating - the airstrike factor, which is read last and usually separated with a dash. So when the British carrier Victorious is called an 027-2, that means it has no gunnery, 2 armor, 7 speed, and 2 airstrikes. The two methods of attack - gunnery and airstrike - can be standard or bonus, the bonus indicating either oxygen-propelled torpedoes, fire-control radar, or superior pilot training. On the counters, the bonus is indicated with a circle, so in writing it's usually offset with parenthesis. So the USS North Carolina 565, and the USS Indiana (5)65 have identical factors but the Indiana gets bonus gunnery and North Carolina doesn't. Amphibious units are 043 for the US and 033 for Japan. Air units are weird as they only have airstrikes and defense, and are read in that order with a * to indicate special movement (they can move to any sea zone where you have at least one base, regardless of distance or enemy control of the sea) - Japanese air is 34*, Allied is 24* but the Allies get more of them.

On a given turn, each side gets reinforcements per a chart and then goes through four phases of deployment - patrolling ships (and repairs, which don't get to deploy that turn), land-based air units, amphibious units, and then raiding ships. In each phase, the Japanese player has to deploy first. Once all the movement is finished, battles are fought, one sea zone in a time, in an order determined by Japan. Battles can be day actions, in which only airstrikes can attack and anyone is a valid target, or night actions, in which only gunnery can attack, air units cannot be targeted, and carriers and amphibious forces can only be targeted if you outnumber your enemy and spread your fire to attack every single surface ship. Combat is fairly simple - to attack, roll nD6 where n is your gunnery or airstrike factor. For standard shots, a 1-4 is a miss. A 5 disables the target and sends it back to port. A 6 is a hit and each hit inflicts 1d6 worth of damage to the target. If the damage exceeds the armor, the target sinks. If not sunk, the damage sticks around to make it more vulnerable in later turns, unless repaired. Bonus shots get a +1 to the to-hit roll (so a 4 is a disable and a 5-6 is a hit) but not the damage roll. If one side has an air unit or patrolling ship still in the area at the end of battle, they control that zone, which adds POC, blocks enemy movement next turn, can aid in converting enemy bases, and aids that side in getting the type of fight (day/night action) they want next turn.