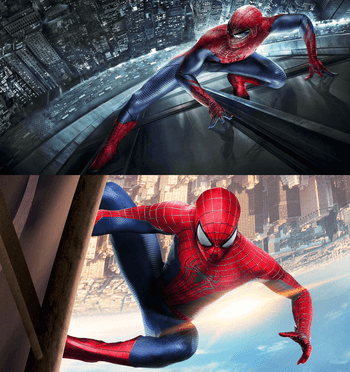 "You owe the world your gifts. You just have to figure out how to use them."
— Ben Parker
Advertisement:

The Amazing Spider-Man is a film duology of the iconic Marvel Comics superhero, directed by Marc Webb of (500) Days of Summer and starring Andrew Garfield as Peter Parker/Spider-Man, alongside Emma Stone as Gwen Stacy, Sally Field as May Parker, Campbell Scott as Richard Parker, Embeth Davidtz as Mary Parker, and Denis Leary as George Stacy. The official designation for the reality these films are set in is Earth-120703.

It was a Continuity Reboot of Sam Raimi's Spider-Man Trilogy, but was still handled by Columbia Pictures (which is owned by Sony). It was produced by Avi Arad (who also produced the aforementioned trilogy) and Matt Tolmach. The film series is notable for being an ambitious attempt at a wide media franchise, but was cancelled due to numerous creative woes that Sony faced in trying to build a Shared Universe without access to the characters of the greater Marvel Universe.

After Raimi had a falling out with Sony over the creative direction of the fourth film in his Spider-Man series, Sony decided to cancel his franchise and reboot the series without him, leading to the removal of trilogy stars Tobey Maguire and Kirsten Dunst as well. Most of the crew who worked on the trilogy remained on board to work on the rebooted franchise, but were now entirely under Sony's creative word.

The series was planned to span at least four main films and many spin-offs, though only two films were produced. Webb was set to direct the third installment, but would not return for the fourth. Ultimately, all further films in this series would be cancelled after the disappointing reception of The Amazing Spider-Man 2 and several behind-the-scenes issues.

The movies are not a part of the Marvel Cinematic Universe, as Sony planned to build an extensive Shared Universe consisting of Spider-Man characters. The Amazing Spider-Man 2 was used as a launching point for this universe, with the movie setting up many spin-offs and sequels. Just about every Spider-Man related character was being considered for a movie, with dozens of films planned or proposed.

Amazing 2 was a critical and financial disappointment, and a number of internal issues at Sony created additional issues behind the scenes, leading to the film series being discontinued. Afterward, Sony struck a deal with Marvel Studios that would allow Spider-Man to appear in the Marvel Cinematic Universe. Tom Holland was cast as Peter Parker, and first appeared in Captain America: Civil War. Holland then helmed his own trilogy of films, with appearances in Avengers: Infinity War and Avengers: Endgame.

The animated film Spider-Man: Into the Spider-Verse, and Venom were the only survivors of Sony's planned slate of spin offs, while everything else was cancelled or reworked, leaving this film series' story unfinished.

However, with the MCU's addition of Spider-Man: No Way Home, this film series was retroactively added to the MCU wider Multiverse, with its versions of Peter Parker, Electro and The Lizard reappearing, once again played by Andrew Garfield, Jamie Foxx, and Rhys Ifans respectively. The movie serves as a crossover with the Spider-Man Trilogy and the Marvel Cinematic Universe, while also providing some closure to a few of the lingering plot threads left from Amazing 2.

Films restructured into other projects